Skip to content
Home » Spices » How to plant, care, grow and harvest cloves – the basics 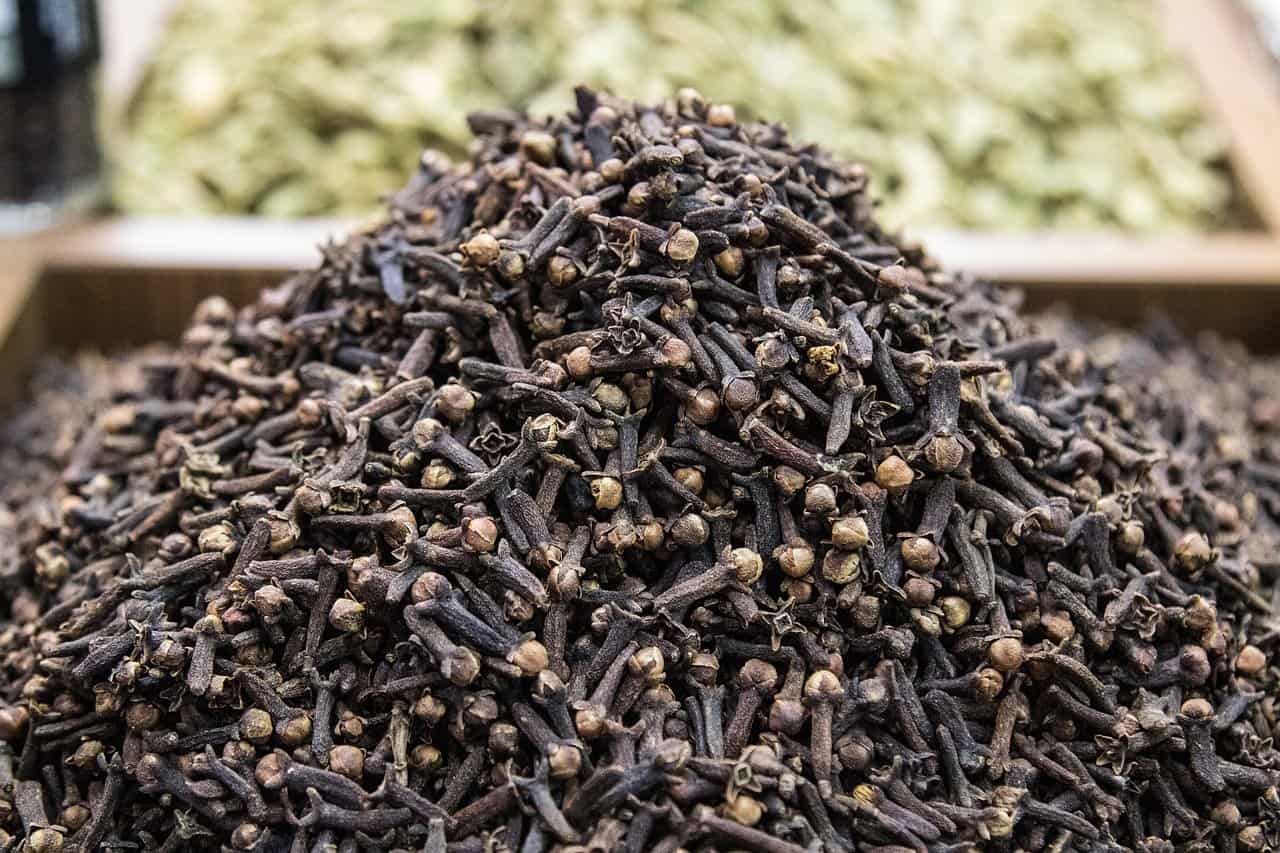 Most of us know them as some of the most popular spices used around Christmas time, but cloves are the dry buds of the flower of the clove tree, very similar to vines. The flower buds are harvested before opening. Their smell is warm, aromatic and spicy. The taste is pleasant, spicy-sweet, astringent and very aromatic. The clove tree comes from Indonesia, from the islands of Ternate, Tidore, Bacan and Halmahera, named in the Middle Ages the Spice Islands, or the Molucca Islands. Cloves (Syzygium aromaticum), are part of the Myrtaceae family, being related to myrrh.

It is assumed that from here it was transported to Java and then spread, by Arab traders, around the world. The Dutch also extended their cultivation and from the 18th century, clove trees were acclimated to other countries. The Chinese used them several centuries BC for their medicinal properties. Thus, the high Chinese dignitaries (the Mandarins) chewed it in their mouths before talking to their sovereign or they were forced to immerse their clothes and body in the aromatic smoke of cloves. Cloves are supposed to have been introduced to Europe in the first century AC.

At the end of the Middle Ages, the spice was used in food preservation, and it was found in some necklaces on Egyptian mummies. The Phoenician traders also brought it to the Mediterranean basin. Alexander the Great transformed the Phoenician port of Tyr into an important trading point with spices from the East. In the 5th century, Arabs were selling cloves to Europeans at very high prices. They were used more as a medicine, and doctors considered them a panacea. The most important producer today is the island of Pemba, along with Zanzibar. Cloves also grow on other islands in eastern Africa (like Madagascar).

The names of cloves in many European languages ​​come from the Latin “clavus” which means “nail”, due to the similarity of the form. Cloves can replace salt and help quench thirst and are also a nice addition to fruits and vegetables. They are used in pastries, sauces, certain soups, in some assortments of cakes, mulled wine or tea. They give the rice a special flavor. They can be used for butter purification.

In many countries, cloves are used in the manufacture of perfumes, toothpaste, bath salts and flavoring of alcoholic beverages. Cloves are one of the most powerful disinfectant plants on earth. A single clove placed, for example, in a broth will extend its shelf life by 24 hours. Therefore, they are necessary for the preservation of almost any food, but also for fighting against a multitude of infectious diseases.

How to plant cloves – the basics

Cloves are most suitable for warm, humid, tropical climates with annual rainfalls of about 150-250 cm. They can be grown at an altitude of up to 800-900 meters. Even though cloves do well in warm climates, the trees need partial shade areas because they shouldn’t be exposed to direct sunlight all day long.

Clove trees have a forked stem, composed of 2 or 3 trunks that can reach up to 40 feet in height. The crown of the trees is dense and has a conical shape. The trees bloom from July to October and from November to January. The flowers contain both types of reproductive organs and have a very sweet fragrance that attracts bees for pollination.

The best types of soils to plant cloves are rich loamy soils, like the ones that are found in wet, humid, tropical regions. Cloves can be planted in heavier soils as well, for example in red soils, but it’s necessary to ensure good drainage to obtain a better yield and a better quality of the production.

For commercial purposes, the most used propagation method used is by seeds. The seeds are collected from fully developed fruits and they are soaked before being planted in nursery beds. The clove seeds should be sowed immediately after harvesting.

Another method of growing clove seedlings is to prepare polybags filled with soil and organic matter (for example cow dung) and to keep them in a cool place with partial shade.

In most cases, clove seeds germinate in 10-15 days and they last for around 45 days. The germinated clove seedlings are moved into polythene bags that contain a mixture of sand, soil and well-decomposed organic matter. The bags should provide enough space for the young plants to develop.

The best time to plant the clove seedlings is during humid periods of time, usually at the beginning of the summer season. There should be enough space between the seedlings (6-7 m) rather deep into the soil, up to 75 cm. Clove seedlings can also be planted as an intercrop, but in this case, the spacing should be based on the spacing of the main crop in the field. In addition, the pits where the seedlings are planted should be filled with compost or green leaves and covered with topsoil.

Cloves grow better at higher altitudes, where they can benefit from well-distributed rainfalls. As intercrops, cloves can be combined with coffee plantations or nuts. To provide the shade that clove trees need, many farmers plant the seedlings close to banana trees, because their large leaves provide plenty of shade for the clove seedlings to develop.

Clove trees can be grown in other climates as well, not only in the regions where they originated from, but it can be difficult to replicate the best conditions. For example, they need plenty of water, well-drained soil and a warm climate (minimum temperatures of 14 Celsius degrees). Most commercial clove trees plantations are located within 10 degrees of the equator.

Starting a clove tree plantation is by no means a short-term project. Most trees live for at least a century and in some cases in up to 300 years. A clove plantation can produce a full crop only after a couple of decades (20 years), so it’s a long-term investment.

Clove seedlings should be watered regularly, especially during a period of excessive drought, or if the plantation is found in a region with extreme heat. As mentioned before, clove trees grow in rich soils that have very good drainage and plenty of organic matter.

There won’t be any usable buds from clove trees until the branches have started to produce a full array of flower clusters. This will take up to six years until the first possible harvest. To replicate the humidity of the native regions of clove trees, light watering combined with frequent misting is recommended treatment options.

Organic fertilizers are very important for the development of clove trees. Often, compost, bone meal or fish meal are applied at the beginning of the rainy season. Once the seedlings start to grow, plant foods can be used such as superphosphate MOP or potassium sulfate. The number of fertilizers used should be doubled for clove trees that are older than 15 years. During the end of summer, when often extreme heat occurs, fertilizers should be applied in split doses, poured into trenches obtained through digging outside of the plant.

Regarding diseases that can attack clove trees, the plants can suffer from seedling wilt, leaf spot, leaf rot, and bud shedding. Most common pests that can damage clove trees are the stem border, scales, and mealybugs.

Seedling wilt is one of the more serious problems that occur in clove plantations. The leaves of affected seedlings lose their natural luster and tend to droop. Ultimately, they will die. Infected plants must be removed because they can further spread the disease.

In the case of leaf rot, leaf spots and bud shedding, the foliage of affected trees should be sprayed with prophylactic and carbendazim.

Scales are insects that feed on the plant and cause yellow spots on the leaves and the wilting of shoots. Overall, plants affected by scales have a poor appearance. Scales infestations can be controlled by spraying monocrotophos.

To take the necessary measures in time in order to prevent the damages caused by pests and disease, the clove plants should be checked at least twice a week, especially under the leaves.

What we know as the clove spice are unopened flower buds collected and dried in the sun. The buds must be picked early and dried before they technically reach maturity. The highest quality cloves are considered those that have a reddish-brown color. When the buds are pressed with a sharp object, they exude aromatic oil.

The unopened buds should be picked before they turn pink in color when they have a rounded and plump shape and no more than two cm in length. Clove buds can be dried in sunlight, in hot air chambers or in airtight jars (in the case of smaller quantities) until they lose 2/3 of their weight and the color of the stems has turned dark brown.

Even though it takes years to obtain a full harvest, the efforts pay off. Just one mature clove tree can yield 7-40 pounds of cloves in one harvest.

How to properly store cloves

Dried cloves don’t have a long shelf life, because they tend to lose their flavor rather quickly. They should be stored in airtight containers, out of direct sunlight and they shouldn’t be kept for more than a year, even with all these precautions.

Once the cloves are processed, meaning they are ground and turned into powder or they are packed, they can last for several years without losing their properties.

It’s important to know that three different types of oil can be obtained from cloves: clove bud oil, clove stem oil, and clove leaf oil. Each type of clove oil has a different chemical composition and a different flavor. Clove bud oil is the most expensive type of oil of all three and it has the highest quality.

Sometimes, they can also be used to make aromatic cigarettes, called kretek, which are widely popular in Indonesia. To make kretek cigarettes, the dried clove buds are mixed with tobacco leaves at a ratio of 2/3 tobacco and 1/3 cloves.

Starting to grow clove trees may be a risky business because it takes time to receive some profit and to have a full yield, but just like other spices, cloves are a profitable business. Let’s not forget that spices had an important part in the development of local economies. Many farmers have decided to invest in this type of plantations once they discovered that the demand for spices is still high.

Even though spices are not as valuable as they were centuries ago when they were hard to get or when only some countries had the monopole on certain spices, clove trees are here to stay and are still among the most expensive spices in the world.

Furthermore, clove tree plantations can be converted into a business opportunity even for those who have to wait until they can obtain a yield they can sell. For example, in Sri Lanka, tourists have the opportunity to visit tea plantations and groves of clove trees and learn about the way these plants are grown and harvested. Considering that people are now willing more than ever to learn where the food on their table comes from, this agri-tourism niche can be explored by farmers who have an “open doors” policy and are willing to share their philosophy and their farming methods with the rest of the world.