Skip to content
Home » Livestock » Types of Wool: 11 Things to Know about Wool 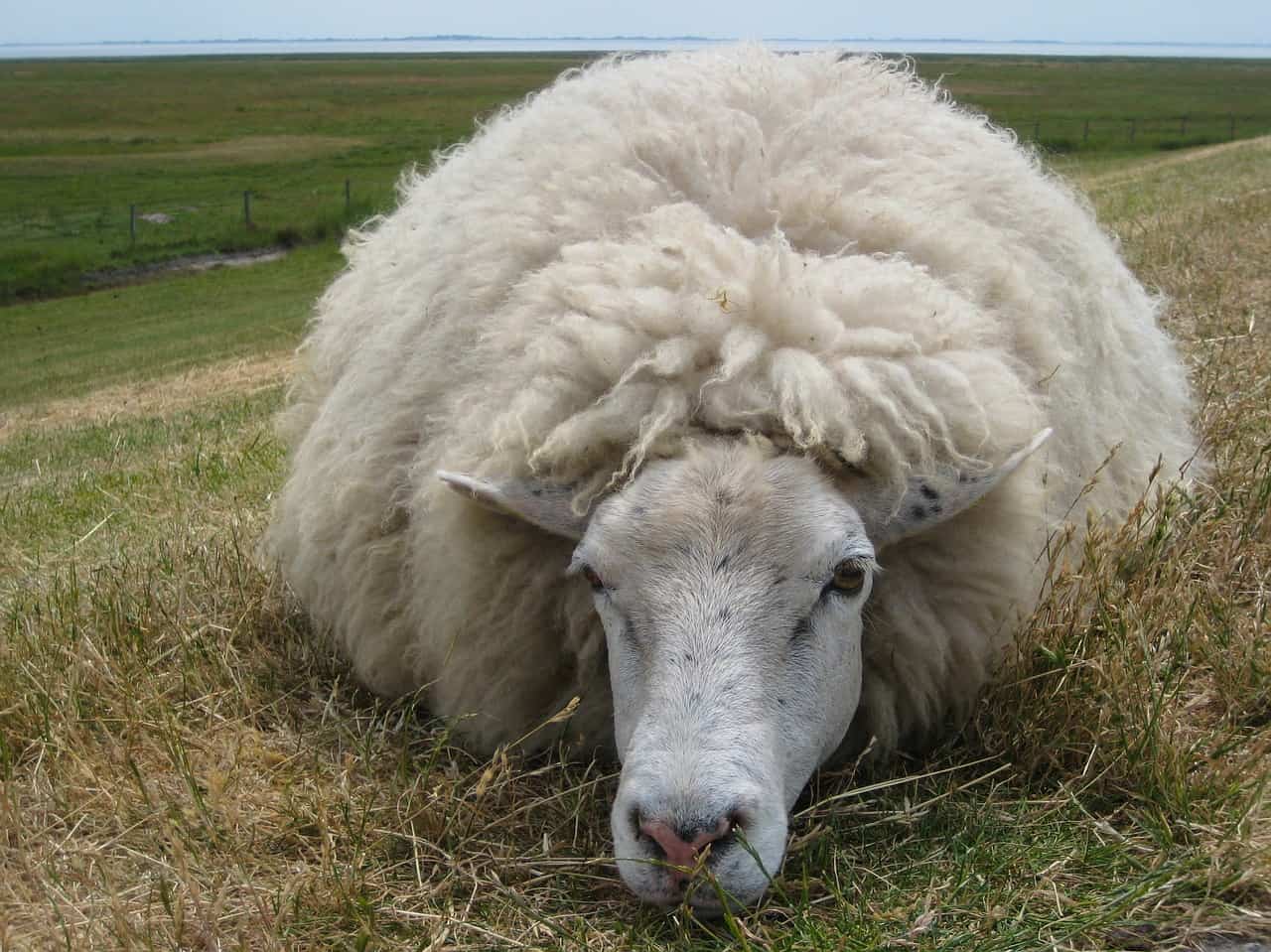 The shorn coat of the sheep is probably known since the Bronze Age as a textile material. The ancient Egyptians already opened wool factories on large scale to process this precious material.

Until the 19th-century wool was considered a precious material and the wearing of woolen clothing was a privilege for wealthy citizens. Only since sheep’s wool was imported in Europe from Australia and New Zealand it became available in sufficient quantities, so the warming material was affordable for the rest of the population.

The sheepskin consists of the outer, stiff and coarse hairs, which serve as protection against the weather, as well as the inner, soft and fine hair, which regulate the body heat. The actual sheep wool is extracted from the inner hair.

Characteristic of the fluffy material is the flaky outer layer of the hair and its ripples, which is very different depending on the breed. The more uniform the fiber structure, the better the quality of the wool.

During wool growth, sebaceous glands produce the body’s own fat lanolin, which wraps around every woolen hair and binds the hair together so that no moisture gets on the skin. Lanolin is also used as a cosmetic product and in medicine.

The shaved fur of sheep is also called fleece. The best wool grows on the back and on the sides. On average, each sheep delivers 3.5 kilograms of wool, depending on race and age. Through the breeding of the past centuries, the amount has approximately tripled.

Felt is also made from the raw wool: for this purpose, the fibers are rolled and densely intertwined under the influence of moist heat, pressure, and soap. Wool is considered to be one of the best and healthiest raw materials available for textiles: depending on their quality and strength, the yarns are used for outerwear, stockings, sportswear, up to rustic knitwear and carpets. Hats and slippers are made from felt.

The benefits of wool

It seems surprising, but since ancient times it has been discovered that wool has healing properties. Experts believe that the therapeutic effect is based on gentle contact with the skin. The fine fiber thus stimulates the blood capillary system, helping to increase the body’s natural healing power. Thanks to the mild heating effect, the muscles relax. The micro massage of wool yarns rivals with preso-puncture and reflexology. The thicker the fabric or the wool, the greater is its energy action. That is why home-made objects of natural wool are beneficial for sick or elder people.

The woven yarns accumulate and maintain the air, thus achieving the thermo-regulation effect. Wool absorbs moisture and dust, acting as an organic filter for the body. The material contains a natural substance called lanolin, with anti-inflammatory and impermeable, so wool, although it absorbs moisture (up to 30% of its weight), does not give the feeling of wetness. The moisture evaporates slowly, and the wool remains dry.

Asides from some its more controversial properties, that are still up for discussion, wool does have other important benefits that are recognized both by those who use it for industrial properties, as well as those who prefer handmade and organic clothing.

Water repellent. The interplay of the two fiber parts which compose the wool is responsible for the moisture management of the wool. The multilayer outer shell is hydrophobic, so water repellent. But it lets water vapor pass through the fiber. Thus, it is possible that wool fibers can absorb about 30% of their own weight of water without the wool feeling wet.

Mechanical self-cleaning. Another fiber-based property of wool is its mechanical self-cleaning quality. Put quite simply, strands of two different types of fibers entwined with each other in a liana-like manner in the filament trunk swell to different degrees when moisture is absorbed and released. Firmly connected, they put the wool fiber in motion. This self-movement of the fiber repels dirt particles lying on the fiber surface. These dirt particles remain only on the surface, they cannot penetrate into the fiber. Due to this natural process, wool doesn’t get dirty so fast.

Chemical self-cleaning. The chemical self-cleaning power of wool is remarkable and responsible for its comfort. The complex physical and chemical structure of a wool fiber allows it to absorb or neutralize a variety of chemicals. Whether this is hydrochloric or sulfuric acid, toxic carbon compounds based on benzene or the ingredients of cigarette smoke, wool “destroys” these foreign substances. That’s why wool clothing doesn’t smell so much even when it’s dirty.

Non-flammable and antistatic. Finally, wool is both non-flammable and antistatic. A spark burns quickly a hole in synthetic clothing, while wool remains unaffected. And anyone who has ever felt a “spark” when touching a metal door handle or had their hair standing up after putting on a blouse made of synthetic material knows how to appreciate the wool’s lack of static charge.

You might think that all wool comes from sheep or that all wool is the same, but this is not true. Wool differs in density, color, shininess and other important properties, depending on its origin.

Like for the most types of wool, the best quality lamb wool is obtained from the first shearing of the sheep. This is considered the softest and finest wool and it typically shorn from lambs that are not yet seven months old. Sheep produce wool depending on their bread, age, and other health factors, but the yield is about 1 to 13 kilos annually. Some breeds produce wool that is more resilient, usually used for carpets, rugs or upholstery, while the softer wool is used for clothing.

It’s considered to be the finest and softest sheep wool and it’s named after a sheep breed. Merino wool is popular among luxury clothing brands. It’s so fine that it can have a diameter of down to 17 microns. Merino sheep originated from Spain, but now most of the Merinos come from Australia (up to 80%).

Merino needs to be processed because it can be spun to a yard and because the wool needs scouring to get rid of the fatty grease lanolin. However, only about half of the initial fleece can be used to produce clothing items.

Cashmere is obtained from goats, more precisely from the undercoat of the Cashmere goat. Cashmere is an extremely fine material. The diameter of the fiber is around 18 microns, which makes it similar to the finest merino. The fines cashmere is collected from the neck region of the undercoat and need to be combed over one to two weeks. One goat usually yields only about 150 grams of cashmere each year, which explains why this material has such a high price.

Although cashmere has resilience similar to the one of sheep’s wool because it’s finer it’s more delicate and softer on the skin. In most cases, when cashmere is finished into clothing, the nap is raised on the wool to further improve its softness.

Angora goats are farmed in a similar way to sheep, but on a much smaller scale, hence the higher price of mohair. One Angora goat yields between 3- kilos of mohair in a year.

Angora is obtained from the undercoat of the Angora rabbit. The fiber is very fine, only about 10-15 microns in diameters. This is why Angora is so incredibly soft compared to all other types of wool. The quality of angora depends on the proportion of the guard hair mixed with the undercoat.

There are four rabbit breeds used for the production of the angora. These are the English rabbit, the French rabbit, the Giant rabbit, and the Satin rabbit. Because angora fibers are not as resilient, they are mixed with stronger elastic materials. The production of angora is costly and often questionable for ethical reasons. The rabbits are kept in separate cages and in near darkness to protect their undercoat.

The hair of the Angora rabbit grows quickly, but one rabbit can produce only up to 400 grams of hair each year.

Alpaca wool is obtained from the hairs of the Alpaca, an animal native from South America which produces some of the finest hair. Alpaca hairs are very fine and soft, having a diameter of only 15-40 microns, but those that are over 30 microns can be itchy so they’re not suitable to make clothing items. In most cases, alpaca fibers are blended with other wool to improve its draping qualities.

Alpaca hair is a natural hypoallergenic, making it superior to other types of wool like cashmere and it needs less preparatory steps. As there are different breeds of Alpaca, the quality of the hairs also differs. The Suri Alpaca is a very rare breed, so the hairs collected from it are very expensive. On the average, an Alpaca can yield about 3.5 kilos in a year.

The undercoat of camels is very soft, making it a good choice for producing clothing items. Camel hair also has very good insulation properties, even better than wool. However, there is also an important disadvantage to camel hair, asides from being rarer to obtain – it’s less resilient and can become worn out easily.

This is a fiber obtained from the domesticated Alaskan musk ox and it usually has a taupe-grey color. The main advantage of this fiber is that it’s eight times warmer than wool, although it has the same weight. Therefore, it’s used for gloves, sweaters, hats, scarves and other types of winter clothing.

This is a very expensive wool, if not the most expensive, as it’s sold for up to 3,000 $ per yard. It’s considered to be one of the softest and finest fibers, but it’s also very rare, especially since the Peruvian government has strict guideline regarding the harvesting and exporting of vicuna, the animals that produce this wool.

Related to the alpaca, the llama produces a type of fiber that is naturally glistening. The llama fibers are weaker and coarser, but they’re suitable to produce warm clothing items. However, llama fibers are rarer, so you won’t find many items made of this wool on the market, compared to other types of wool.

This is a less common type of fiber obtained from a crossbreed of an Angora doe and a Cashmere buck. It’s finer than mohair, not as fine as cashmere fibers, so more like something “in between”.

3 thoughts on “Types of Wool: 11 Things to Know about Wool”