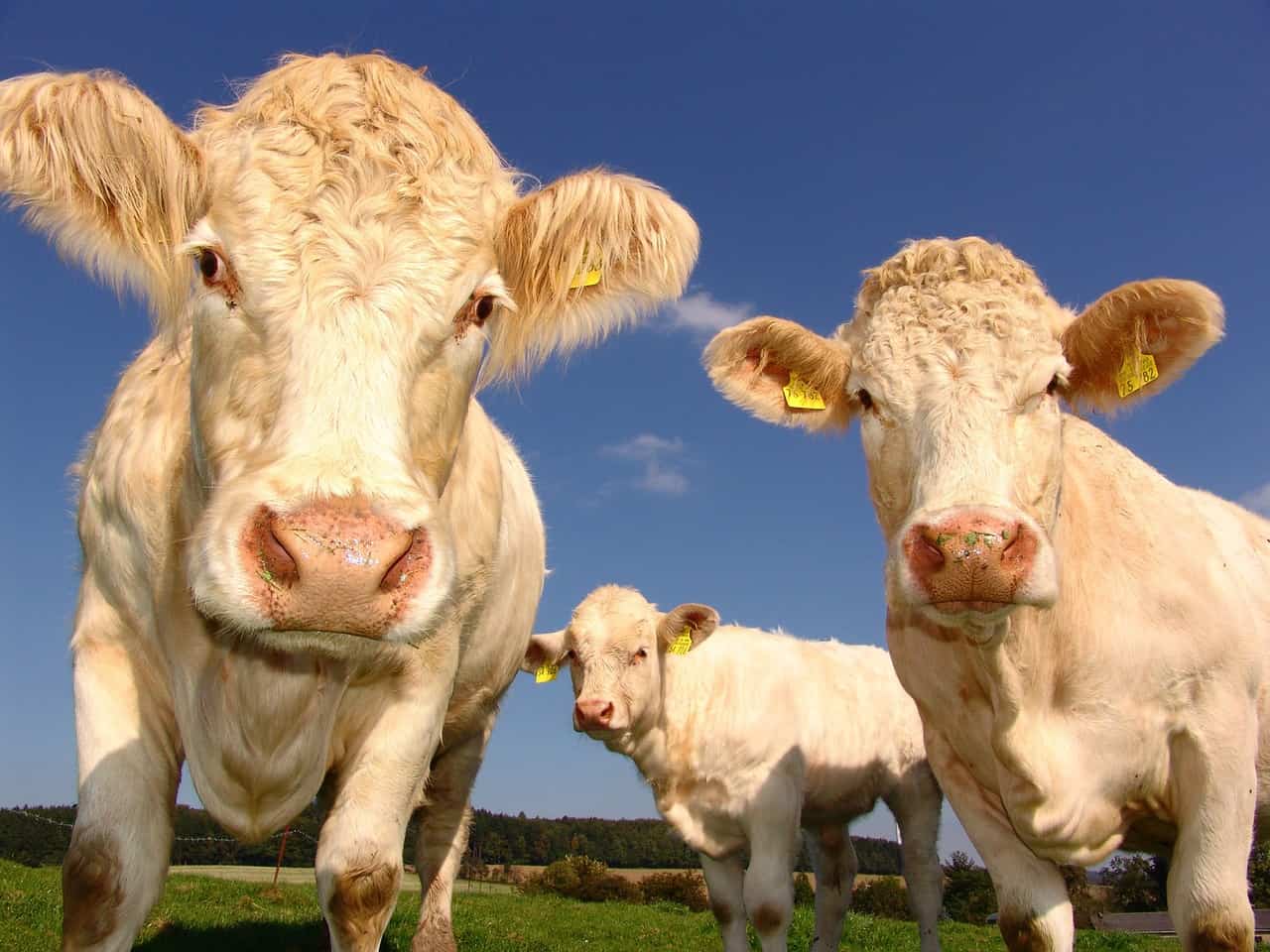 In terms of size, this is a very important factor when it comes to cows, especially regarding the meat and milk production they offer. At first glance, large cows seem to be a recipe for success for any farmer, but equally important is to take into consideration the challenges of raising large cattle breeds. Not only food is a challenge, but also how a cow breed can adapt to certain environmental and climate conditions.

So, with regard to the selection of cows for cattle farms, it is not always that large breeds are most likely to increase profitability. The modern domestic cow is part of one of the species: Bos taurus (most farm cows) or Bos indicus (cows with humps, such as Brahma). Some are combinations of these two. There are more than 920 cow breeds in the world today. Here are the largest breeds of cows in the world and some of their main characteristics:

Chianina is the largest cattle breed in the world. It originated in Tuscany, Italy, and it can reach a height of 2 m and a weight of more than 1,700 kg. Chianina cows are both the tallest and heaviest cows in the world, as well as one of the oldest cattle breeds.

The breed is mainly used for beef production, but in the past it was also popular as draught cattle. Chianina cows can easily adapt to warmer climates, having a tough skin that is also resistant to parasites.

Also known as “The Gentle Giant”, South Devon cows originated in the United Kingdom, being the largest native cattle breed from Great Britain. They can achieve a weight of 1,600 kg on the average, although the largest recorded South Devon cow had 2,000 kg. Bulls from this breed can be used for work up to the age of 12.

South Devon is known as a breed for both meat and milk. High milk production and the developed maternal instinct ensure a high percentage of survival of youth. The cows are able to reproduce for 15 years. With such longevity, few heifers are needed to upgrade the herd, many of which are available for sale as breeding animals or superior quality beef carcasses.

Just like the name suggests, this French cow breed originated in the Anjou region. It can reach a weight of approximately 1,400 kg and it’s raised both for milk and beef production. The breed is famous for the fact that it can easily built muscle and also for easy fattening.

Originally, French farmers used Maine-Anjou cows if they had small land patches, because they could gain a nice income from the cows, as they would fatten up so easy. Especially the bulls can be quite temperamental, but the cows have a great maternal instinct and because of the high quality milk they provide, the calves are always thoroughly nourished.

Originally bred as a multi-purpose breed in the German Rhine-Palatinate region, today Glan cattle is used mainly for beef production. It can reach 1.45 m in height and a weight of up to 1,200 kg.  Unfortunately, the breed is now rarely used and the number of cattle is fading each year.

This cow breed is not used in breeding programs and in shows, because of its phenotypes, which is why the breed was almost extinct. After the efforts of a preservation society established in 1985, the Glan Cattle has made a slow comeback, but it is still a cow breed that is less known.

Another cattle breed that can be included in the top of the biggest cows in the world also comes from Germany. Cows can reach a weight of 1,200 kg, having a height of 1.5 m. The breed was developed in the 1950s when the Aberdeen Angus cattle were crossed with different cow breeds native of Germany.

The main goal of the selection was to obtain a large sized breed, with good temperament and without horns that could be used for beef production with lower fat content. The German Angus is also used as a cow breed or vegetation management and for beef suckling.

This cow breed originated in the French region of Montbeliard, used mainly for dairy farms. A single cow from this breed can produce more than 7,400 liters annually. Montbeliarde can reach 1.54 m in height and up to 1,200 kg.

Montbeliarde cows produces a milk rich in casein type B, which contributes to the increase in yield and cheese production and is in the top of the cheeses of protected origin (Comte Reblochon, Mont’Dor, etc). Also, the breed is widely used due to the production qualities and functional characteristics of the specimens.

This cattle breed finds its place in the top of the biggest cows in the world, with a height of 1.45 m and a weight of up to 1,150 kg. It originated in the region Deux-Sevres and it is said to be one of the oldest French cattle breeds.

The cows provide high quality milk used for several dairy products, including butter and they were also used for draught work. It can also be used for beef production, because of the high quality meat that is low in cholesterol.

Highly muscled beef cattle, this French breed can reach a weight of 1,100 kg. As a result of the environment where they were bred, in the regions Limousin and Marche, these cows have an unusual sturdiness, good health and great adaptability. In addition to their beef qualities, Limousin cows were also used as work animals.

Bazadaise cows were originally used for farm work in the grapevines of Bordeaux. The cows can reach a weight of up to 1,100 kg. The breed has been gradually used as a reputable beef bread instead of just a sturdy work animals and it now one of the most common French cattle breed used for beef production.

Meat production is characterized by: quality, quantity – due to direct crossings, which lead to increased carcass weight and a high proportion of quality parts; low production costs – labor force, feed and level of mechanization.

Other large cattle breeds that are worth mentioning are the Brahman, Pinzgauer, Normande, Vorderwald, Belted Galloway, Pie Rouge des Plaines or the Gayal.

The biggest cows in the world

Although Holstein cows are considered a large cattle breed, on average the specimens of this breed are not among the largest in the world. That’s why the more interesting it is that currently the largest cow in the world is believed to be Danniel, a giant Holstein cow owned by Ken Farley from Ferndale, California. Danniel has a height of 1.93 m and weights 1,043 kg.

The previous holder of the record as the biggest cow was Blossom, a cow from Illinois that died at the age of 13 in 2015 and was also a Holstein cow.

Other contenders for the biggest cow in the world were Big Moo from Australia and Chilli, a Fresian cow from the Ferne Animal Sanctuary in Chard, Somerset, England.

Most large cattle breeds are also very tough when it comes to environmental factors, because they were used as farm animals in the past and they know how to adapt to harsh weather conditions. For example, Angus cows have the great advantage of not requiring investment in shelters. In 16-19 months, cattle reach a weight of 650 kilograms, with a carcass yield of 65-70%.

Another important aspect is that most large cattle breeds are suitable for both beef production and milk production, therefore farmers can choose which type of profitability they aim for, depending on market demand, price of beef or milk and the period of time they are willing to wait for a return of investment.

On the other hand, the main disadvantage of big cattle breeds is that they require plenty of food and water. Cattle farms always need water, clean stalls and medicine. Regardless if it’s dairy or beef cattle, the animals should be in top health conditions, because otherwise the products can’t be sold. Other expenses of cattle farms in general include immunizations utilities, repairs and maintenance for stalls and storage buildings, transportation of animals and milk, veterinary care, breeding costs or artificial insemination.

However, there is no saying if it’s better to raise big cows, medium-sized cows or smaller cattle breeds, because it all depends on the main goal and purpose of the cattle farm, of the facilities it has (in terms of pasture, utilities etc.) and on the investments made in cattle.

2 thoughts on “The Top 10 Biggest Cows in the World”