Sesame (Sesamum indicum) is one of the oldest spices, dating from 1600 BC. Its exact origin is not yet known, but this is still to be determined after many DNA tests. However, it appears to originate in India, from where it subsequently spread to Africa and Asia. The cultivation of these seeds in areas of Greece and Asia Minor has been mentioned in the Naturalis Historia natural sciences book written by Pliny the Elder. Also, Teofrast and Herodot mention in their writings the cultivation of sesame seeds.

Sesame is an oily plant, as the seeds contain 55-60% oil and 24% protein. The cold extracted oil has a very refined taste, being used in the food industry, for confectionery and pastry. The resulting sesame cakes are rich in protein and fat, being used in confectionery or forage.

The largest sesame areas are grown in Asia, especially in India, which holds about 2.5 million hectares, and in China, with 900,000 hectares. Other important sesame producers are Myanmar, Ethiopia, Nigeria, Tanzania and Sudan. However, the most productive sesame farms are located in Greece, where largest productions per hectare were recorded in 2013.

On the other hand, the largest sesame seeds importing countries are Japan, China, Turkey, South Korea and Israel.

As a crop, sesame has important agricultural attributes. It adapts easily to temperate and tropical conditions, it grows well in soils with good soil moisture with minimal rainfall or irrigation. It produces good yields under high temperature and the resulting seeds have a high market value.

Sesame seeds are commercialized in various forms. Most of them are used to produce oil, but the seeds are also suitable for various bakery products and other goods of the food industry. Raw or roasted sesame seeds are high in demand on the bio/organic food market. 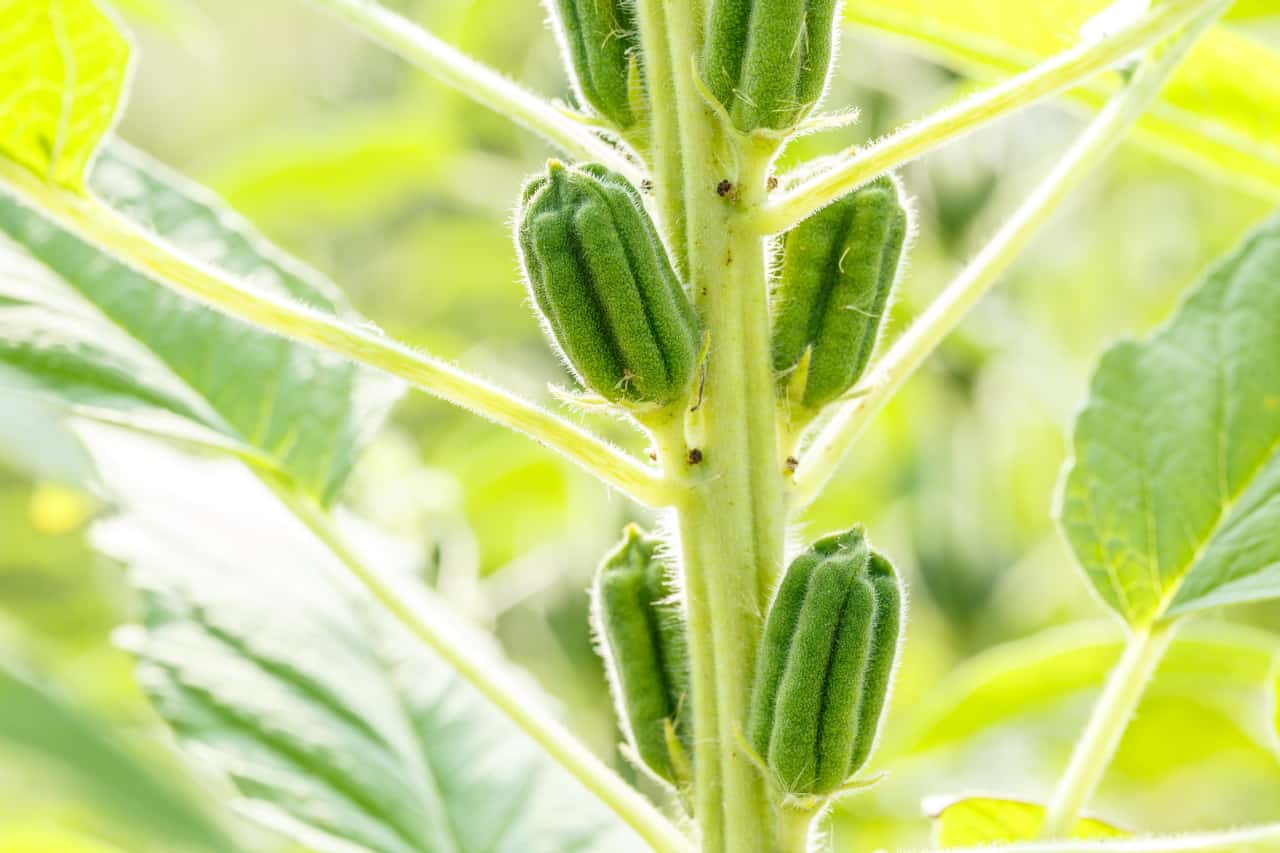 Sesame is part of the Pedaliaceae plant family and the species Sesamum indicum is usually grown. The plant has a pivotal, slightly branched root. The stem is straight, 50-150 cm high, covered with bristles. The leaves are long and covered with small bristles. The flowers, 1-3 in number, are found at the base of the leaves and have various colors, from white to purple. The fruit is a 4 cm long dehiscent capsule. The seeds are small, oval and also have different colors.

The plant grows best in hot climates, as during the vegetation period, which lasts 78-85 days, it needs thermal constant and temperatures higher than 0° C. Seeds germinate at 15-16° C and cannot withstand temperatures below + 5° C, and at temperatures below + 15° C the plant doesn’t grow. Sesame likes moisture and it’s not resistant to drought. Best productions are obtained on fertile soils, with medium texture and deeper groundwater.

To select the most suitable soil for sesame growing, look into the following characteristics:

There are usually two types of sesame seeds used for farming – the white seeds suitable for the bakery industry and the brown or mixed sesame seeds for oil production. However, it’s not recommended to mix different types of seeds because the harvest seed quality will be uneven.

How to plant sesame

Sesame grows slowly in the early stages of vegetation, which is why the soil must be free of weeds. It can be planted in soils that were previously used for legumes, autumn cereals and industrial plants fertilized with manure. Regarding the fertilization of sesame, it’s important to know that about 70% of the nutrients are consumed after the flowering period, which is why fertilization is necessary during vegetation.

Soil preparation aims at creating a loose, graded and leveled ground. Basic soil preparation techniques used are weeding, ploughing and harrowing. Weeds are cleared manually, mechanically or by using herbicides. Ploughing should be carried out after the first rainfall, to ensure that the soil is soft enough to allow the penetration of elements.

Sesame is sown later, usually with specialized machinery, at a distance of 35-45 cm between the rows, 2-3 cm deep using 7-8 kilograms of seeds per hectare. If the soil is dry, it is advisable to roll slightly after sowing. As maintenance work, weeding is required.

During the early stages of vegetation, sesame grows slowly and it can’t compete with weeds. This is the main reason why the soil should be properly cleared of weeds before the sesame is sown.

Waterlogging is the main culprit for root and stem diseases, but high humidity can also damage sesame cultures.

How to harvest sesame

The harvesting takes place when the fruit at the base are ripe, the seeds from the fruit get the color specific to the variety, and the leaves at the base of the stem have fallen. Sesame is usually ready for harvesting between 90 to 130 days after planting.

On small surfaces sesame is harvested with the sickle and then bounded into bundles, where it continues to dry without losing its quality. After drying, the bundles collapse to the ground. On larger surfaces it is harvested in two phases. First, it’s cut with a windrower and left in the swaths which, after drying, are collected with a combine harvester. 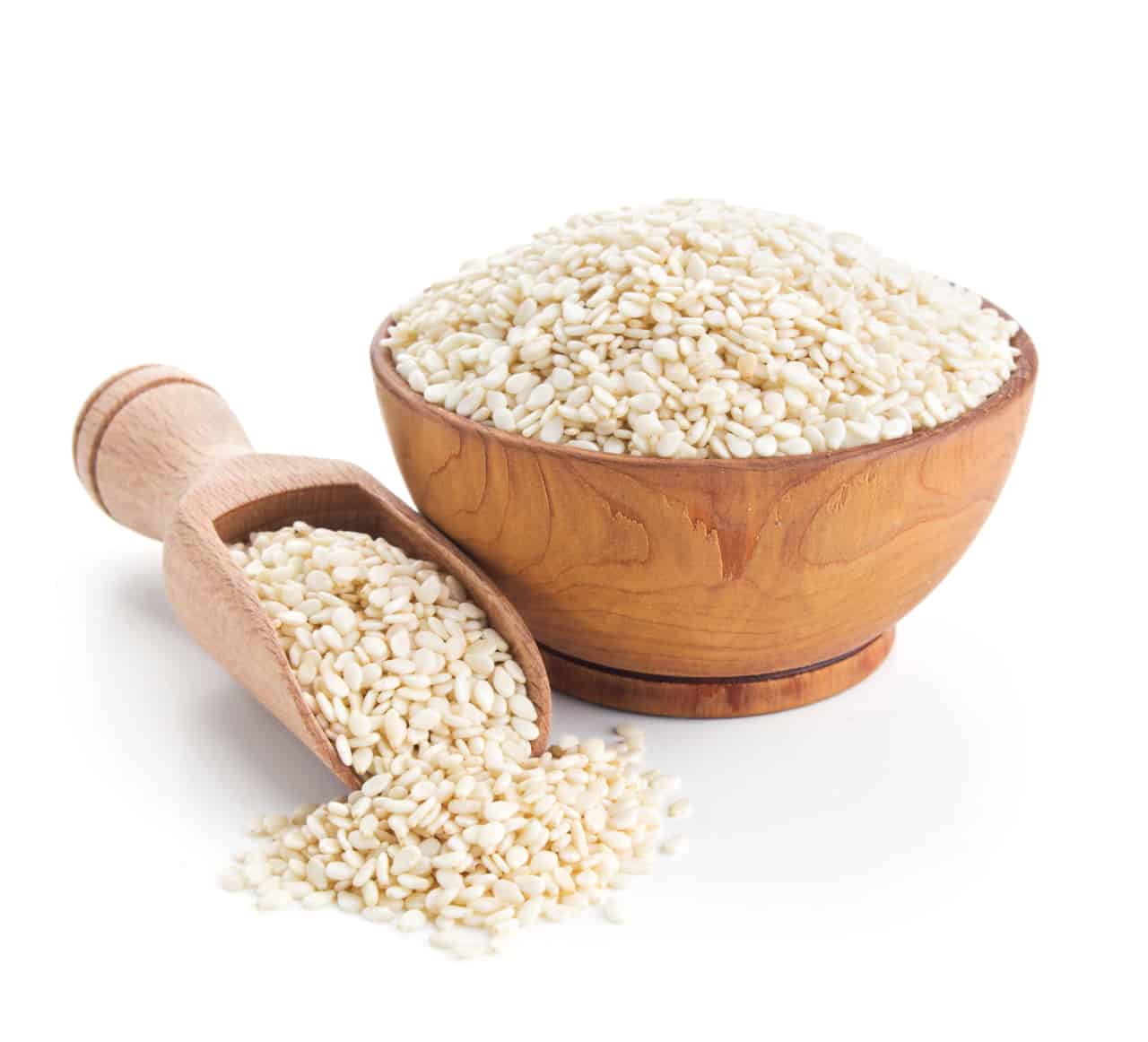 How to store sesame seeds

The harvested seeds are laid in a thin layer and shaken from time to time until they reach 9% humidity. Approximately 1,500 kilograms per hectare can be obtained. The seeds must be threshed without having further contact with the soil, to avoid any possible contamination that affects their quality.

Sesame is left to dry in the field and stored only when there is about 6% moisture. Moist seeds lead to low yields, especially for oil production and they can also clog parts of the machinery used for oil pressing. In addition, moist seeds are prune to fungal infestation; therefore, ensuring that the seeds are dry enough before storing them into containers is critical.

4 thoughts on “How to grow sesame”