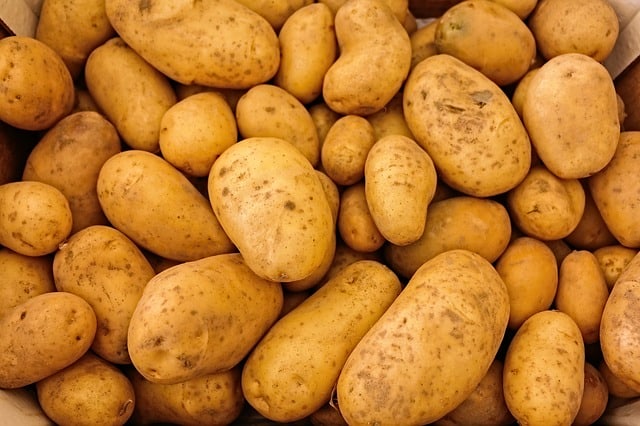 Potato crops rank fourth in world production of food after wheat, corn and rice. The potato is originally from the Andes of South America and has become an important food crop in the cold highlands of South America, Asia (Himalaya) and Central and Eastern Africa.

Average yields per hectare for potatoes are the highest in North America (USA, Canada) 41.2 tons / ha respectively. Asia and Europe are the major potato producing regions of the world (over 80% of the world production).

Countries that consume most potatoes for food are:

Highest consumption of potatoes per capita in a year is in Belarus 181 kg / capita, Kyrgyzstan 143 kg / capita, Ukraine 136 kg / capita, followed closely by residents of Northwestern European countries (Poland, Germany, UK). Therefore, potatoes are a basic food in many regions of the world.

It comes as no surprise that one of the worldwide leading agriculture companies, Syngenta released a new seed treatment for potatoes. The new CruiserMaxx Vibrance Potato promises to deliver protection against early – season insects and diseases for potato crops.

Vibrance RootingPower is a substance developed by Syngenta, combining three of the most powerful fungicides, to offer protection against Rhizoctonia, Helminthosporium and Fusarium. In addition, the substances protect the potato seed against some of the most common insects that damage potato crops, such as the Colorado potato beetle, potato leafhopper, aphids and potato psyllid. Asides for protection against diseases and insects, the Cruiser Vigor Effect ensures and increased plant health and vigor, maximizing the plant’s response to insecticides.

CruiserMaxx contains sedaxane, fludioxonil and difenoconazole as fungicides, as well as thiamethoxam insecticide. Combining the effects of all these substances, the formula promises to deliver best results even at a single use rate. It also helps in wound healing and suberization of young plants, without the need of additional polymers or other types of additives.

Sedaxane is an active ingredient namely a succinate dehydrogenease inhibitor, which allows broad – spectrum control of pathogens, such as Ascomycetes and Oomycetes species in crops.

Fludioxonil is a contact and penetrating fungicide, with a broad spectrum of action and long-term effects. It penetrates the seed, controlling superficial infections. It also prevents against secondary infections that might occur in crops.

Difenoconazole is a systemic fungicide with a broad spectrum of antifungal actions. It is selective to cultures and supports the developing of a strong and healthy root system.

Thiamethoxam is a systemic insecticide with contact and ingestion action. After administration, it penetrates into the plant and is transported by xylems throughout the plant, including in the sprouts grown after the treatment. In the leaf, it has translaminar action, protecting the back of the leaf, even if it doesn’t come into contact with the substance. It affects the nervous system of pests, causing cessation of their nurture, having a residual effect of up to 2 – 3 weeks.

Protection against diseases and insects

Silver scurf (Helminthosporium solani) is a plant diseases caused by a fungus, specific to infecting only potato tubers. This disease affects mainly tubers, which means that the potatoes are not suitable for direct consumption, but they are also often rejected by the industry even for processing purposes. In some cases, the disease affects the development of the tuber yield. The symptoms of silver scurf are becoming even worse in the case of stored potatoes, as the disease develops at high temperatures and high humidity.

Fusarium dry rot is a disease that occurs in the field, but most damages are recorded after the potatoes are stored. Fusarium species that parasitize the potato produce various symptoms. Fusarium oxysporum produces a withering mass extinction of plants and even their plants show a slow growth, which is observed in uneven plants height. Attacked have a watery pulp, they rot, the leaves wilt, turn yellow and dry, while the stems and tubers present a brown – reddish coloring.

Rhizoctonia solani is a disease caused by the fungus with the same name. The disease attacks all organs of the potato that are found in the soil. The fungus throughout the growing season can attack the roots and sprouts of the potato, but in general, the aggressiveness of the disease is higher in the first part of the growing season (spring-summer).

The Colorado beetle rapidly destroys potatoes, eggplants or tomatoes, and even flowers if it’s not stopped on time. These insects can lay thousands of eggs in one weeks time, which is why they are so dangerous for crops.

Aphids (plant lice) attack a large number of species of plants including vegetables. Plant lice are insects with a soft body and their mobility is greatly reduced because of the risk of dehydration – the location on the underside of the leaf is not accidental because it protects them from direct sunlight. They have different colors – green, gray, brown, pink, colors acquired according from the sap on which they feed. Most species of aphids are monofage but there are exceptions as Myzus persicae, which is polyphagous, attacking hundreds of host plants. Because they feed on plant sap, aphids can attack and create great damage to crops.

Due to its formula, Syngenta’s CruiserMaxx promises to offer protection against all these common diseases and pests that attach potato cultures, which is why it will probably fit in just fine with farmers interested in protecting their crops.

How CruiserMaxx stacks up to the competition

Considering that potato cultures are so widely spread throughout the world, it’s natural that Syngenta’s product has some heavy competition. For example, in terms of disease control, Consento (from Bayer) or Signum (from BASF) are also fungicides used in the early stages of plant – development. However, CruiserMaxx Vibrance Potato is holding its own, as it combines the properties of three powerful fungicides and one pesticide that is effective against most common pests that attack potato cultures.

Thus, farmers will only need to use one product in the early stages of plant development. The product can also be used in all temperatures and treating conditions, which ensures and easier application, even for large-scale crops.

Although the product is also available and approved in the US, the main target markets for it will probably Europe and Asia as these regions cover most of the worldwide potato production.

According to a research conducted by Eurostat, almost 60 million tons of potatoes were harvested in the European Union in 2014, with Germany, France and Poland being the largest producers. In the same year, the value of EU’s production of potatoes, at basic prices, was more than 9 billion EUR.

Asia alone accounted for more than half of the world’s potato production, with China and India being the biggest producers (almost 35% of the production) in 2015, according to a Mordor Intelligence report.  However, for the 2016 – 2021 period, the fastest growing market for potatoes is expected to be in the Middle East, East Asia and Brazil. The largest market demand for potatoes will still come from European and North American markets.

Considering all these figures, it’s no surprise that Syngenta, with its presence in more than 90 countries across the globe has invested in research activities for the creation of a new products, targeted especially at potato farmers. If it follows in the footsteps of other CruiserMaxx products that are already successful, the agriculture company most likely has a winning product in its hands.