Skip to content
Home » Floriculture » What is the real price of Valentine’s Day flowers? 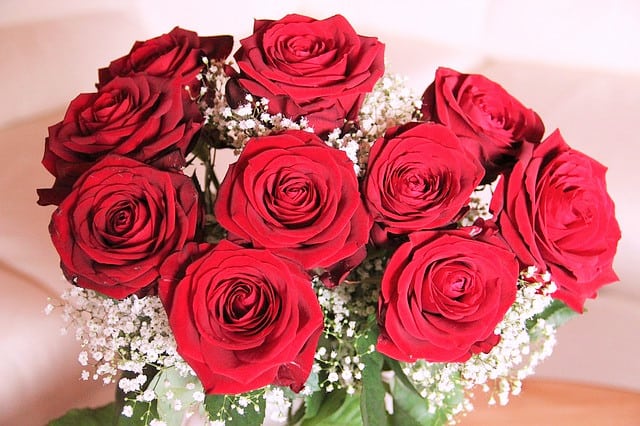 The first evidence when February 14 was recognized as an important date goes back to the year 498, when three saints were named by Pope Gelasius I, the date of their celebration being this day.

But the holiday remains associated with the name of St. Valentine of Rome, who was sent to prison for officiating secret marriages for soldiers who were forbidden to get married. While in jail, he is said to have cured his jailer’s daughter, Asterius. It seems that before the execution, he sent her a letter which he signed with “your Valentine” as a sign of goodbye.

The time when February 14 has become a day for celebrating love is recorded in the fourteenth century, when the first writings of love appeared. Convinced that February 14 is the day when birds gather for mating, the English began to send love notes that they called “My Valentine”. Geoffrey Chaucer mentions this popular holiday custom in 1382. 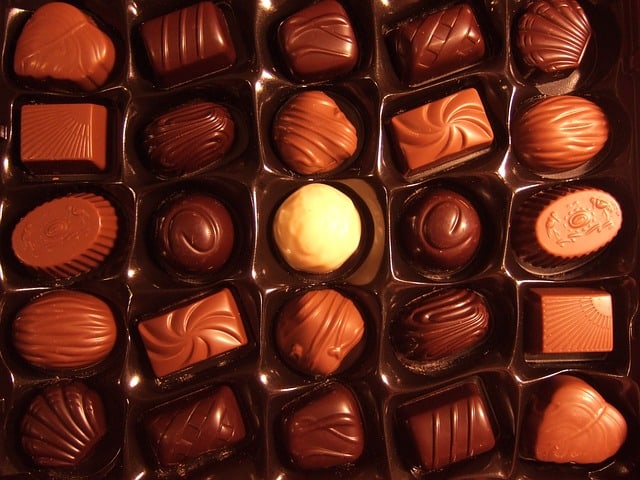 Usually, on Valentine’s Day it’s customary to offer chocolates or other kinds of sweet treats to loved ones. The first box of chocolates decorated for Valentine’s Day appeared in the late 1800s, and the one who came up with this idea was Richard Cadbury, son of John Cadbury, the famous chocolate producer.

Over time, Valentine’s Day was a holiday on which a lot of impressive gifts were offered. For example, in 1557 Diane de Poitiers received from France’s king Henry II the royal property Chenonceau. Also in 1631, Emperor Shah Jahan built the famous Taj Mahal for his wife, Mumtaz Mahal, who died after giving birth to her 14th child. Therefore, it’s safe to say that anything and everything is possible on Valentine’s Day, as an expression of love.

However, Valentine’s Day is the time of the year when millions of people choose to propose to their sweetheart annually. This means that a lot of engagement rings are offered on this occasion, which brings important profits to the diamond and gold industries.

Even if diamond rings and chocolates have been replaced in recent years with other options, there is one small token of affection that is still offered on this day: flowers. Be it a single rose, an elaborate flower bouquet or potted plants, Valentine’s Day is the perfect “pretext” to offer some flowers to that special someone.

Without a doubt, the most popular flowers offered on Valentine’s Day are roses. A symbol of love, even since ancient times, as it was associated with goddesses of love in the Roman and Greek mythology, roses have preserved their status a lovers’ flowers to this day. Because she loved roses, Cleopatra’s palace floors were paved with rose petals, and one of China’s emperors had over six hundred books on how to care for roses. In his plays, Shakespeare made over fifty references to roses. 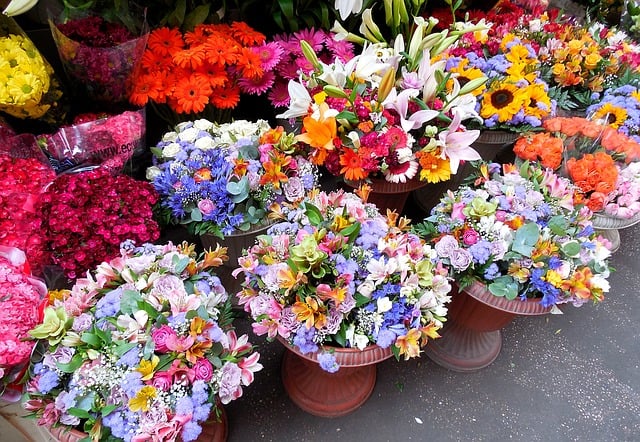 According to Rabobank’s World Floriculture map, the Netherlands was the largest cut flower export nation in 2015, with a market share of more than 50%, but its dominance in the field is slightly diminishing over the last years, with other important exports coming from Colombia, Ecuador or Kenya. The U.S. and Japan also count for the largest cut flower production, but the distribution is also made through Netherlands. Netherlands only accounts for 10% of the world production, but its exports are much higher.

The reason why the production of cut flowers has shifted towards less developed countries is that they offer the necessary climatic conditions that can provide year round production, with low labor costs. Other important players in the cut flower industry are Belgium, Malaysia, Italy, Germany and Israel.

Cut flowers are traded worldwide, taking up a hefty chunk of the flower industry, while living plants are traded more on regional and local level. Due to the geographic expansion of flower production, as well as the development of logistics, the transportation of cut flowers was made more viable, which is why this sector will most likely grow in the future.

The value of the global flower trade industry raises up to $104,825,000,000, while the total value of cut flower sales totaling $7,500,000,000, according to the U.S. Bureau of Economic Analysis.  20% of the flowers are purchased in the USA on Valentine’s Day, nearly as much as the number of flowers purchased on Mother’s Day. 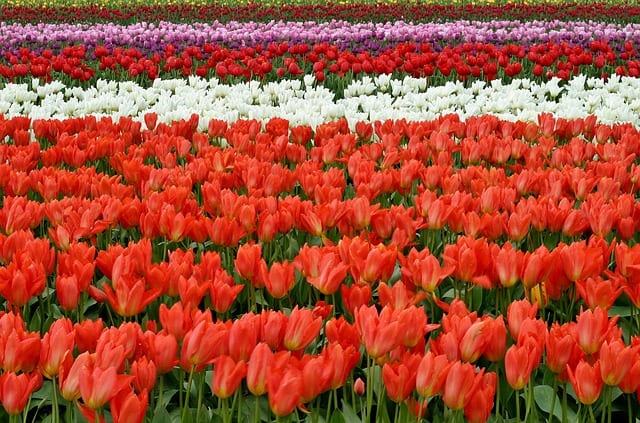 The environmental impact of floriculture

The floriculture industry has more permissive regulations, because flowers are not considered edible crops (although some flowers are edible, but they are rarely used in restaurants and other food establishments). Therefore, considerably more pesticides are used for growing flowers, as opposed to foods. The chemicals used as pesticides for flowers are also more damaging to the environment and to humans in some cases. For example, Methyl  Bromide is a toxic chemical used in the flower industry that is five times for dangerous than Carbon Dioxide and it’s harmful for the ozone layer.

It’s important to note, however, than in all developing countries Methyl Bromide is being replaced, due to the provisions of the Montreal Protocol, signed in 1987, with the purpose of preventing the depletion of the ozone layer.

Another important concern is that, flowers that have been pre – treated with potent pesticides are pollinated by bees that spread the pesticides on crops as well. This means that the pesticides are not only dangerous for the environment, but for the bee population and for humans as well.

A study published in the International Journal of Environmental Health Research revealed the dangers associated with pesticide exposure among farmers that work in the cut flowers industry in Philippines.  32% of the workers reported several illnesses related to the use and handling of pesticides on flowers.

What’s more concerning is that a study published in 2003 found that more than 70% of cut flowers growers all around the world show genetic damage.

Another important issue that needs to be addressed is the fact that growing flowers requires water, and lots of it. Growing flowers in already water – stressed countries such as Kenya an Ethiopia has led to the expansion of the virtual water trade. The concept of virtual water is still debatable, as it’s difficult to assess the best allocation for already scarce water resources.

All in all, the cut flower market is quite unstable. It provides employment for thousands of people all over the world and it’s one of the few industries that are actually expanding in countries where jobs are greatly needed. On the other hand, the industry is still vulnerable to a wide range of external factors, such as climate change, currency rates, oil prices and the economic situation in target markets.

Therefore, the real price on flowers is difficult to be set. When you consider the necessary land for growing flowers, the water resources, the carbon print and the labor involved to obtain significant profits, it’s difficult to tell if it’s all worth it. Nevertheless, flowers have always been present in our lives, for thousands of years now, and it’s hard to imagine a future without them. 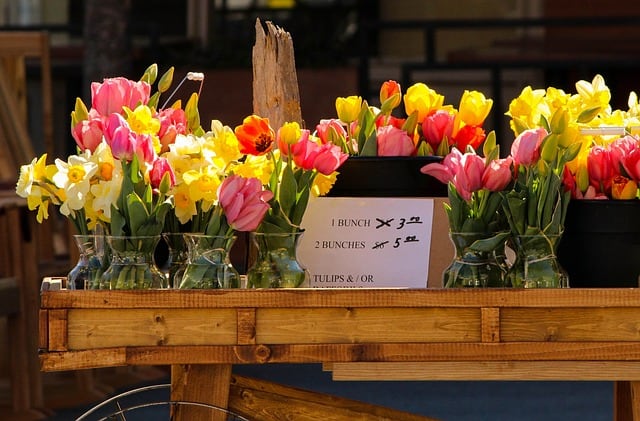 The best alternative when it comes to cut flowers is either to grow your own, if possible, or to buy flowers grown from certified organic seeds, that were not treated with toxic pesticides. Although the sustainable flower market is still small, it’s clearly growing, as the number of consumers that have concerns regarding where the flowers they buy come from and how they were grown is also increasing.

According to the USDA, the number of small flowers farms has increased approximately with 20% over the past five years. In 2012, there were almost 6,000 sustainable flower farms across the USA. This is certainly a niche that can be exploited in the future, with the ever growing interest of consumes to buy organic food or non – food products, safer for the environment and for their health.

Most small flower growers are following the same practices used by organic food farmers, an already booming industry, based on a simple rule: everything that comes from a farm goes straight to the table.

Whether you opt for a flower bouquet, for a box of chocolates or for a Valentine’s Day card, one thing is for sure: this holiday that is now being “adopted” on global level, even in countries where it wasn’t celebrated in the past, will always be associated with small “tokens of love”. You decide how much is it really worth spending on such a token.