Skip to content
Home » Poultry » Brahma Chickens: All You Need to Know About Them 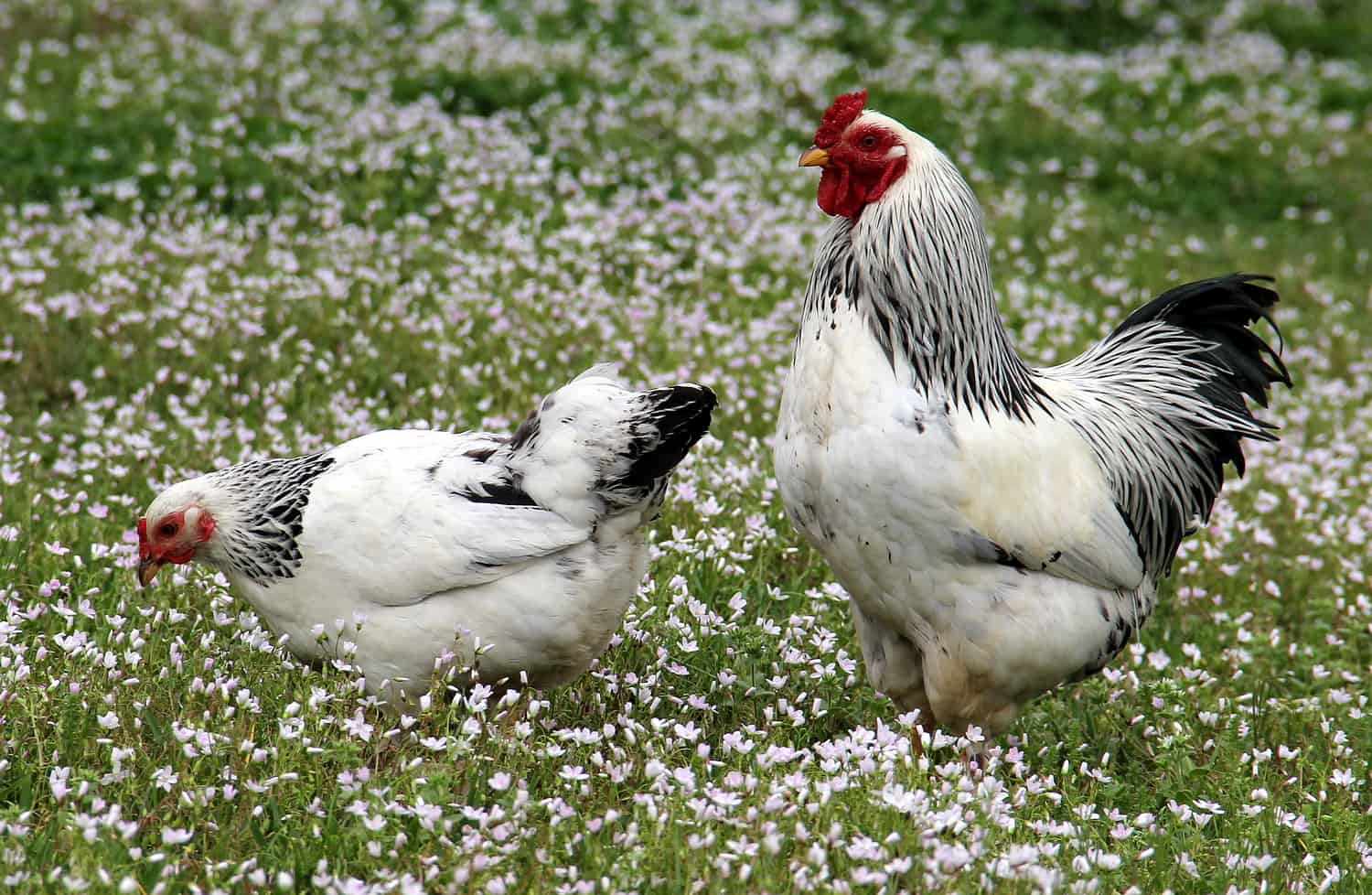 I’m sure you’ve already heard about one of the largest chicken breeds, the Brahma, often referred to as the “King of Chickens”. You’ve probably seen all those viral videos of Brahma roosters showcasing their size, and I bet you watched them in disbelief of how large these chickens can be! Don’t worry, you weren’t the only one who felt this way.

Are you curious to find out more about these giants? Well, stick around, because, by the end of this article, you will learn everything there is to know about this chicken breed.

Therefore, without any further delay, let’s get into details.

Their history is fraught with debate, as there were no standards, registries, or poultry associations in the early days of breeding. Some voices claim the Brahma, named after the Brahmaputra River, may be from India. According to the opposite view, it came from the Chinese port of Shanghai, and hence could be related to the Cochin birds.

However, its unique head shape and pea comb show that the Brahma probably resulted from cross-breeding with Chittagong birds from Bengal (now Bangladesh). One thing is certain: the breed was developed in the United States of America in the mid-1800s from massive fowl imported from China.

Yet, public attention was first called to them when George Burnham sent nine of his finest Brahmas to Queen Victoria of England as a gift in 1852. As you could expect, the price jumped from $12-15/pair to $100-150/pair. At the time, Her Majesty’s collection of fowl was very considerable, and as a result, Victorians everywhere yearned for fancy chickens.

Furthermore, the enthusiasm spread to America, which was mesmerized by the obsession with owning the world’s finest chickens, commonly known as “Hen Fever.” For the first time in the nation’s history, chickens were important.

The Brahma was by far the most popular meat chicken in the US from the 1840s until the 1930s. True, they could feed a medium-sized family, but the fact that they needed up to two years to mature, a later period than many other breeds, changed matters.

Nonetheless, with the rise of backyard poultry farming, the Brahmas are back in business. This chicken is now classified as a heritage breed by the American Poultry Association.

The Brahma chicken is a majestic creature. They are the second-largest chicken breed in the world. The average Brahma chicken can grow to be 18 inches (45 cm) tall and can weigh up to 8 pounds (3.6 kg). Moreover, roosters can be up to 30 inches (76 cm) tall and as heavy as 12 pounds (5.4 kg). There is no doubt that they look both tall and stocky. Even so, they are big softies at heart.

According to the American Standard of Perfection, they come in three color varieties: light, dark, and buff. The light Brahma is mainly white, but its hackle and tail have contrasting white and black feathers, whereas the dark Brahma’s coloration varies depending on its sex. Males have a silver hackle and black on their body, breast, and tail.

Their saddle feathers are striped black and white. Females’ bodies, as well as their backs, breasts, and wings, are grey, while their hackles are black with white flecks. Finally, the buff Brahma is essentially a color replica of the light Brahma, only that, instead of white, it’s the owner of that delicious shade of caramel.

They have adorably fluffy legs and huge personalities to match. They glide with elegance and grace at all times. Not only that, but they have a distinctive head shape and powerful wings. Their bodies are large, with relatively small heads and prominent eyes. They have a pea comb, and their beaks are short and strong.

Besides, this chicken species has tight, soft, and dense feathers, which means it doesn’t tolerate heat well, despite its ability to adapt to various weather conditions.

Brahma chickens are entirely laid-back and have a zen-like attitude. They are even called “huggable”. Still, they will stand up for themselves when needed. They get along well with other birds, as they like to avoid drama. Their life expectancy is 7-9 years. They can, however, live a few years longer if they are treated with care and patience. They make excellent family pets since they rarely say no to cuddles.

But, while they appear to be the ideal all-around breed, don’t add them to your backyard just yet. They’ll either be a fantastic pick or a dreadful mistake, depending on your local temperature, present flock, and space constraints.

The Brahma is an ideal choice for anyone who enjoys huge, friendly chickens. But, if you’re still on the fence about bringing some feathered friends into your home, let me explain some advantages and disadvantages of having a Brahma.

As previously mentioned, Brahmas are notably good egg-layers. However, they only lay their first eggs at the age of 6-7 months. They lay 3-4 eggs per week on average and about 150 eggs annually, which is quite a good number. They will supply your breakfast on a regular basis for up to two years before their output naturally begins to diminish, just like any other hen.

Besides, the size of these eggs, which are larger and more colorful than store-bought eggs, is the most appealing feature. A Brahma egg can weigh anything from 1.83 oz to 2.33 oz (52-66 gr).

They don’t get broody often, but once they do, they’re excellent mothers, which is ideal for building a long-term flock. Early in the summer, Brahmas become broody, and if encouraged, they sit well on their nests. Unfortunately, they frequently trample their eggs and young due to their sheer size. If you wish to breed your Brahmas, an incubator and brooder may be the ideal option.

Where to Buy Brahma Chickens

Searching for breeders and hatcheries on Google is one of the simplest ways to locate Brahma chickens. Light Brahmas tend to be a widely available and popular choice. If you buy them from a hatchery, it’ll cost around $3 for a chick.

On the other hand, adolescents range between $7–12 and adults, $12–15, depending on quality and color. Keeping a Brahma chicken does not require a license, even though it is a recovering species.

Fortunately, Brahma chickens are easy to take care of and raise, even for first-time chicken owners. They tend to be healthy, except that they are prone to obesity, so regularly check their weight. Always remember that keeping your Brahma chicken healthy should entail some degree of veterinary care, a warm environment, clean water, and a well-balanced diet.

If you are acquiring your Brahmas as chicks, provide them with an 18% protein chick starter feed and clean water, along with a vitamin supplement to help with intestinal flora. Nevertheless, a 16% layer feed will be ideal for most of the year.

It is also highly beneficial to give your chickens a calcium supplement in the form of oyster or shell grit to ensure they never run the risk of developing soft-shelled eggs. Although Brahma chickens are disease-resistant, they must be vaccinated on a regular basis.

Provide a good chicken coop to keep them from harming themselves. They will also be safe from predators as a result of this. For the most part, a coop for your Brahmas should be at least 4 square feet per bird (a third of an sq. m) for each chicken to range independently. If you go below this, you’ll encourage anti-social behaviors like biting and pecking.

Allow them to roam freely and run around on a routine basis, as these breeds are more susceptible to bumblefoot as a result of their massive physique. Be sure to keep the coop clean.

Another thing you must take into account is the feathering on the feet because they’re prone to getting mud caked on them. Dirt and moisture can freeze and create little mud balls on the chicken’s feet throughout the winter, causing frostbite, if not treated promptly. For this reason, Brahmas bloom in drier climates with well-drained soil. Because of their dense feathering, mites and lice can be difficult to detect.

Check your Brahma for symptoms on a constant schedule. Spend time with them, and you will reap the benefits. Brahmas will most likely eat off your hand or seek you out to pick them up.

So, after analyzing all of this, is Brahma the best alternative for you? This is a question only you may be able to answer. Brahma chickens are gentle and charming, making them an ideal breed for beginners or children. Despite their fearsome appearance, they are gentle giants.

Imagine having your friends drop by, seeing this massive chicken, and learning that there’s no need to be afraid when you hand-feed them. You’ll instantly fall in love with Brahmas because of their placid nature. However, keep in mind that there are other unique considerations to be made.

If you do it right and follow the steps, investing in chicken farming can be quite profitable. They are efficient in producing unlimited volumes of manure, which may be decomposed and applied to your garden to boost yields, in addition to providing you with a steady supply of eggs and meat. However, because each person has a different viewpoint, there will be no answer to whether Brahma chickens are superior to other kinds of normal chickens or not.

To decide whether this bird is the right choice for you, check our Pro and Cons list from above. Still, one thing is for sure, you will not be disappointed in these birds. You’ll adore their goofy appearances and placid demeanor, not to mention the eggs. And now that you know everything there is to know about them, nothing can hold you back. Best of luck!

Involved in the "green" arena for over 10 years, Leah has worn many hats due to her diverse experience and knowledge in the field. In addition to writing for Agronomag, she's also a sustainability consultant with a unique perspective on eco-friendly farming practices. Topics she loves to geek out about: regenerative food systems, chickens and cattle breeds, homesteading and green cities.

2 thoughts on “Brahma Chickens: All You Need to Know About Them”