Skip to content
Home » Livestock » The Most Common Pig Diseases 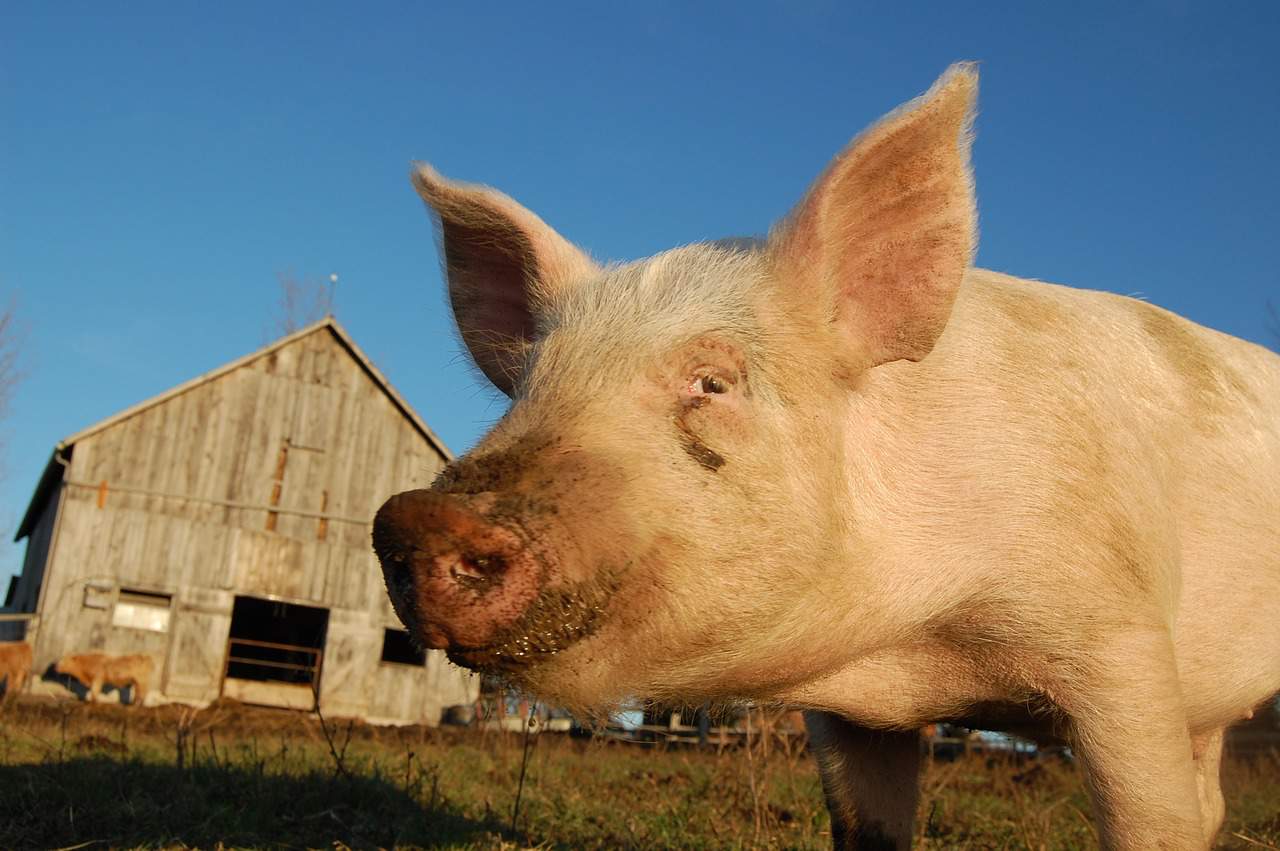 Pig producers, just like any other animal farmers are well aware of the fact that in order to be successful in their field, they must ensure the health of their pig stock. Given that prevention is the best measure to avoid losing valuable animals, it’s important to know which are some of the most common pig diseases, their symptoms and treatment methods. It should also be noted how important it is to work with specialists – veterinarians and technicians – to establish a herd health plan to cover the three stages of the pig production (pre-weaning, growing-finishing, and breeding).

Pig diseases in the pre-weaning stage

This disease is caused by an infection with the Staphylococcus hyicus bacteria and it manifests through skin lesions. Mortality can occur due to greasy pig disease in severe cases that are left untreated. The lesions first appear as dark spots on the skin, which spread and become flaky, with a greasy feel.

The infection is treated with antibiotics, skin protectants, and autogenous vaccines. One of the best prevention methods is to improve hygiene conditions in the piglet housing areas. It is also recommended to perform teat dipping on the sows as well as pre- and post-farrowing. By reducing the potential of skin abrasions, the infection is prevented from entering the piglet’s system. Skin abrasions can be caused by rough floors, sharp equipment, jagged teeth or mites’ bites.

Coccidiosis is very common in suckling pigs, being caused by three types of the coccidia intercellular parasite. The main symptom is diarrhea, which can also be bloody and it occurs during between 10 and 21 days of age and up to 15 weeks of age. Acute cases can be treated with coccidiostats and fluid therapy. Because the intestinal wall can be damaged in some cases, secondary infections may occur.

Sows can be treated with coccidiostats in order to prevent this disease. It’s also good to improve hygiene conditions on the farm, to end the circle of infections. Sow feces are a major source of infections. In addition, flies drawn to the feces can further spread the infection. To prevent the occurrence of parasite infections, it is recommended to maintain a warm, clean and dry creep area on the farm.

Pig diseases in the post-weaning stage

The most common symptoms of respiratory diseases are coughing, sneezing, heavy breathing, reduced growth, and even mortality. To treat this type of diseases, antibiotics are often given in feed or water or as injectable substances. Certain environmental conditions or poor ventilation can worsen respiratory diseases or help spread them. For example, high levels of ammonia found in the environment can damage the respiratory tract and thus making pigs more prune to infections.

Among the infectious agents responsible for the occurrence of respiratory diseases are Streptococcus suis and Pasteurella. Some forms of pneumonia can be prevented through vaccines, but it’s important to identify the strain present on a farm to fight against this disease in an efficient way. Especially pleuropneumonia, caused by Actinobacillus pleuropneumoniae can cause a high mortality rate and the surviving pigs suffer from reduced growth rate and lung damage. Along with the presence of respiratory viruses, overcrowded and dirty housing are predisposing factors for respiratory diseases.

Swine dysentery is also treated with antibiotics which are given through feed or water, or as injectable substances. To reduce the infection, it’s recommended to reduce the stock density. Improving hygiene and rodent control can also significantly help prevent and reduce the potential of infection. Rodents are important when it comes to the spreading of swine dysentery. The disease can occur when new stock is introduced on the farm, so it’s important to always buy pigs from reliable sources and to request a thorough medical check-up.

Pig diseases in the breeding stage

Mastitis is a disease present in sows and it has symptoms such as reduced milk production, higher body temperature and loss of appetite. The disease is caused by a bacterial infection of the mammary glands, where skin discolorations can be observed. Antibiotics and anti-inflammatory drugs are the most efficient treatment for mastitis. Usually, a combination of oxytocin and corticosteroids is prescribed to treat mastitis.

Like in the case of other pig diseases, improving hygiene in farrowing houses is extremely important. Healthy nutrition during the late pregnancy stage is an important factor to increase immunity. Stress is also considered a factor in the occurrence of mastitis, especially if the teats may suffer damages in the sow housing facilities. Mastitis has an important effect on productivity because the number of piglets weaned by sows can be significantly reduced.

PPV is problematic usually during pregnancies, but other pigs can also spread the disease. As there are no treatments for this disease, prevention is extremely important, through regular vaccination of gilts.

This is one of the most common pig diseases, easily recognizable because the animals grow slowly and are visibly thin. In healthy pigs, the only bones that should be visible are the shoulder blades. If farmers can notice the backbone, the hips or the ribs, the pigs are too thin. Pigs have a great advantage of growing rapidly. If they are growing too slowly, it’s most likely because of malnutrition.

As major factors in the spreading of diseases on pig farms, lice and flies infestations pose a serious health threat. Pig lice are rather large and very easy to spot. They can cause blood loss and the infection with bacteria. Flies can also be a problem because they enter open wounds and cause infections. Both lice and flies can be treated with sprays. Ensuring proper hygiene in the housing areas, using fly traps and flypaper can prevent infestations.

Roundworms are the most common parasites found in pigs. They live in the gut, have a worm-like appearance (hence the name) and cause weight loss. Young pigs present the highest risk of infestation. Roundworms can block the gut and cause death. Even if the pigs survive, if the parasites are not eliminated, the pigs’ growth is permanently reduced. The parasites are eliminated with dewormers which are injected, dosed in the feed or drenched.

Tapeworm parasites live in the muscle of the pigs and cause pig measles. The pigs are seemingly not affected, but they can experience pain and have difficulties to move around. Pig meat infected with tapeworms is very dangerous for human consumption. Undercooked infected meat contains tapeworm cysts, which develop into worms in the intestines and cause serious health problems. Infected pigs can’t be treated for this parasite, but farmers should take preventive measures such as practicing good hygiene and stopping pigs from wandering around outside from the farm.

Salt poisoning occurs because of improper feed. Pigs fed with restaurant leftovers or with food leftovers from various sources may contain too much salt. Pigs affected by salt poisoning appear to be blind, they lose their balance and fall over, they vomit and have seizures. To prevent this problem, farmers should always ensure quality feed for their pigs.

Outbreaks occurred over the last years makes this disease more common than it used to be. African swine fever is caused by the Asfarviridae family of viruses, which are distinct from the viruses associated with Classical swine fever. There are 22 known types of the ASF virus. The ASF infection can be introduced through several ways: contaminated feed, tick, and lice bites, contaminated medical equipment and infected pigs.

There is no treatment for the African swine fever or a live or attenuated vaccine to prevent this disease, therefore strict biosecurity measures are the only ways to prevent infection and the spreading of infections. Infected animals must be isolated and culled immediately if the presence of the virus is confirmed.

FMD is caused by a picornaviridae aphthovirus. There are 7 main serotypes which have in their turn many strains. More than 60 subtypes of the virus have been identified so far, therefore it’s difficult to develop an effective vaccine against it. The symptoms of FMD include lameness, excessive salivation, blisters, loss of appetite, fever, and death in severe cases.

Routine vaccination is used mainly to protect the breeding stock from FMD. However, vaccination is problematic because its protection is only short-lived. Since FMD usually occurs during winter, pigs should be vaccinated in the autumn. Furthermore, because there are several serotypes, the vaccines must be multivalent in order to be effective. The disease can be spread to and by other farm animals as well, so preventive measures should be enforced to cattle, sheep, and goats as well. There is no treatment for this disease and infected animals should be culled.

Rabies is an infectious disease found in all species of homoeothermic animals, transmissible in humans, characterized by severe nerve disorders, expressed by hyperexcitability and aggression, followed by paralysis and death. To a greater or lesser extent, all warm-blooded animals are susceptible to rabies infection. In pigs, rabies usually evolves in a quick form and is manifested by strong hyperesthesia. Incubation is between 15-30 days. The pig becomes aggressive, shaky, shrieks or shouts in a hoarse voice, quickly attacks other pigs or other animals, causing serious wounds by pulling tissues. The sows devour their piglets.

To prevent rabies, farmers should be aware of the application of a complex of general sanitary-veterinary and immunoprophylaxis measures. Unfortunately, animals infected with rabies can’t be saved and the final outcome is death.

2 thoughts on “The Most Common Pig Diseases”