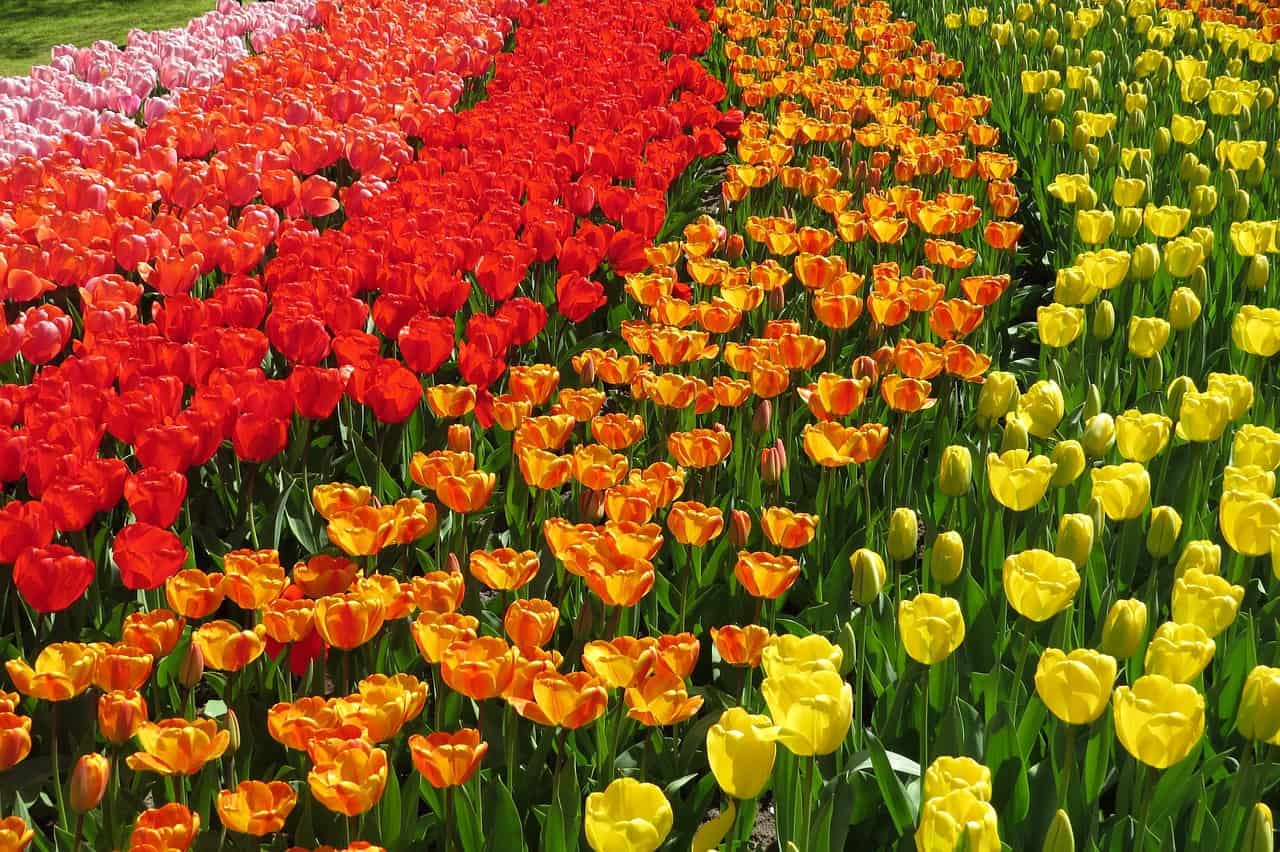 Large flower fields, creating a mosaic of kaleidoscopic colors, are some of the most visited landmarks in the Netherlands. Seen from a distance, these fields look like colored crayons arranged neatly in a box. The vibrant blue, the electrifying red, the pale pink, the golden yellow and the royal violet catch your eye along with the tulip farmers who hope, like every year, to make profit from the sale of these famous spring flowers.

Hundreds of thousands of tourists come in every season to catch a piece of the natural color show for which Netherlands is recognized throughout the world. They park their caravans beside the tulips fields in an attempt to discover every hue and get acquainted with rare species. More than 3 billion tulips are grown every year here, and two-thirds of them are exported, most to the United States and Germany.

The tulip season starts in March and lasts until August, several “generations” of tulips being grown in this period. After the last crop is harvested, the land is cultivated with vegetables.

The business of growing flower bulbs began almost 400 years ago, and today the Netherlands produces more than 9 billion bulbs each year, of which two thirds are exported worldwide.

Once, the value of tulips was enormous. They were brought to the Netherlands from Turkey around 1593 and gradually seized the passions of rich Dutchmen. During the “Tulip Mania“, a period considered the first speculative bubble in history, it is said that a single bulb was sold for the price of a canal house in Amsterdam, which today is worth 500,000 euros.

Considering that the global flower trade industry raises up to more than 104 billion dollars, with biggest flower sales around certain holidays, it’s only natural that tulip farms are a big part of it, especially in the Netherlands, where tulip growing has become a tradition and one of the things for which the country is best known. Many tulip farms make profits from the tourism industry, as plenty of tourists are willing to travel to the Netherlands to watch the tulip fields and find out more about their cultivation and uses in various industries.

Most tulip fields are located in the province of Flevoland, in the Noordoostpolder region. Therefore, for all those who consider traveling to the country of windmills and wooden clogs to find out more about tulips, here are some of the most beautiful tulip fields in Netherlands. 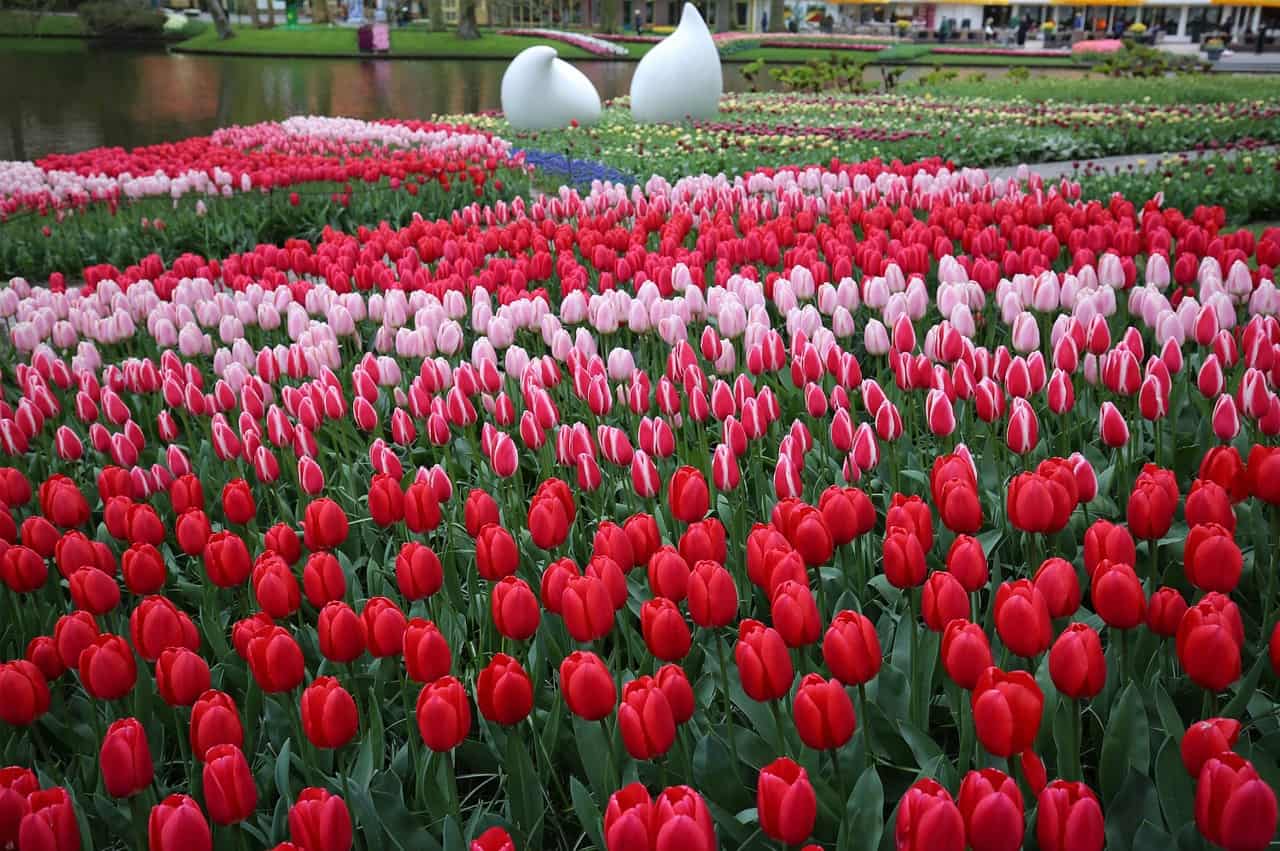 The Dutch passion for tulips has led to the opening of the world’s most beloved flower garden with 800,000 visitors each year, spanning 32 hectares. Also annually, 7 million bulbs are planted at Keukenhof, from 800 types of tulips.

The bottom of the former Zuiderzee, at 4 meters below sea level has become suited for tulip cultivation. The fields in this area are home to more than 2,000 varieties of tulips and there is even an annual tulip festival organized during the months of April and May in Noordoostpolder. The small island of Schokland is part of UNESCO World Heritage. 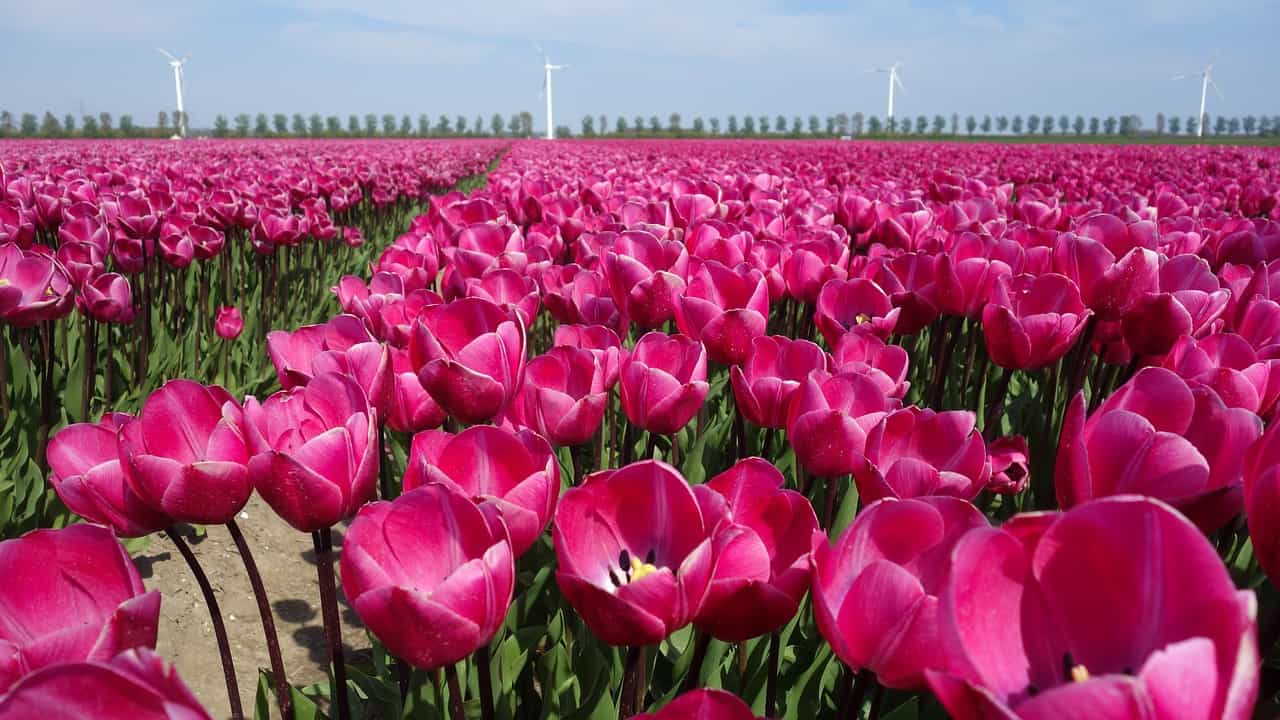 Bollenstreek is the area known as the “bulb district” near Amsterdam. Although the city itself is one of the best places in the Netherlands where tourists from all over the world can enjoy seeing various tulips species on display in many parks and gardens, those who want to see the tulip fields have to make a 30 minute drive outside of the city. Most tulip fields in this area are located behind the North Sea dunes, providing a very scenic location.

This small coastal land located between the cities Leiden and Haarlem is famous for its tulip fields and trails through a small Dutch town called Noordwijkerhout. The region is an ideal destination for rural tourism, cycling and hiking through the colorful tulip fields, especially during spring.

Dronten is a municipality in the province of Flevoland, where tulip fields were nothing new, but only starting with 2015, local authorities decided to map out special routes circling many of the fields to attract more tulip watchers. The Tulip Route includes car routes, as well as cycling and hiking routes. Like in many other tulip fields, most farmers are not growing the flowers for the fresh cut industry, but rather for the bulb industry.

Even though Lisse is usually associated with Keukenhof, the Dutch town is actually surrounded by hundreds of smaller or larger tulips fields. Most of these fields provide millions of flowers for the international flower market. Lisse, a territory that belonged during medieval times to Teylingen Castle, is accessible by car, bus or train from Amsterdam. There, it’s also possible to visit the Museum of Zwarte Tulp, dedicated to the long history of Dutch tulip tradition.

Naaldwijk is probably the best place to see what powerful industry tulips have created in the Netherlands. There are the most tulip fields, the largest greenhouse in the world, and the Naaldwijk auction house, where there’s even possible to participate in a flower auction. It’s interesting to follow the entire process, from initial auctions, to selling flowers to the most important traders in the industry. 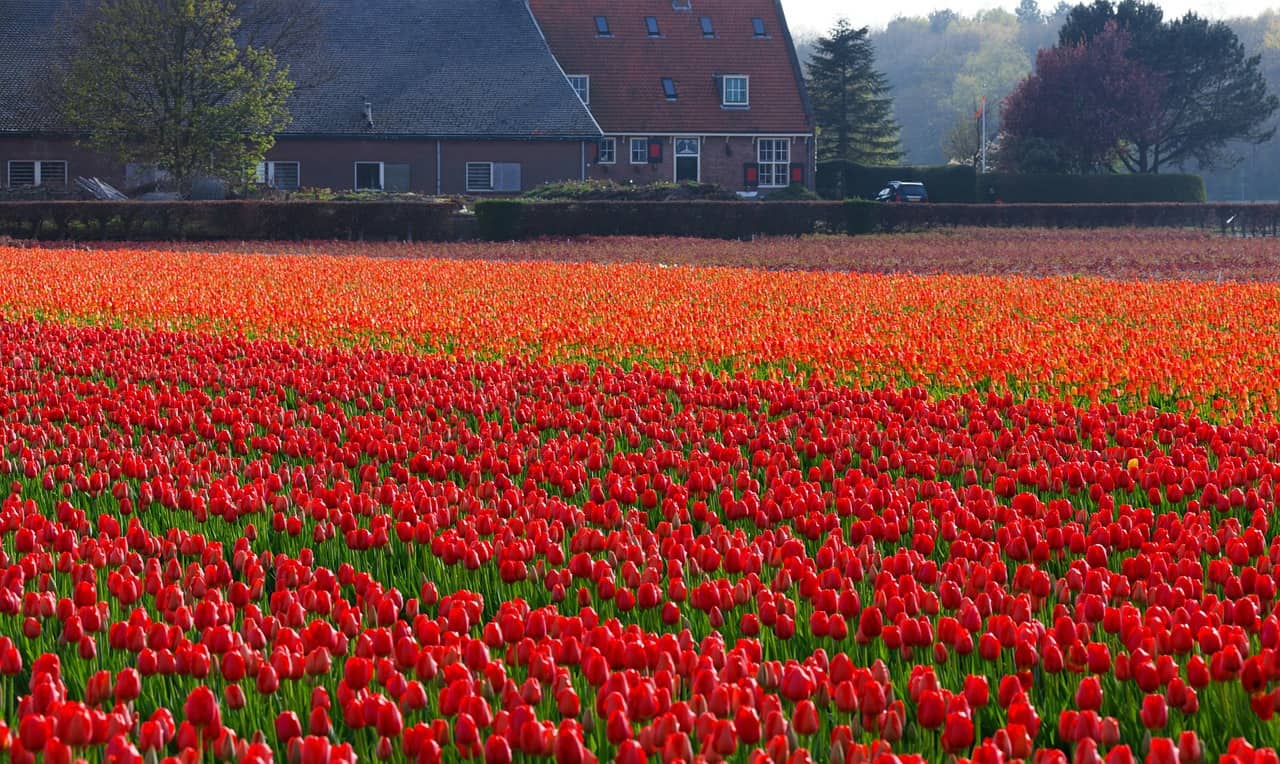 The tulips fields can be visited in the Anna Paulowna area, a former Dutch municipality which was merged along with other three municipalities in 2012 to form Hollands Kroon. Old farmhouses and wind mills are scattered all around the flower fields, creating a landscape similar to what you could find hundreds of years ago in the area.

The town of Schagen is located between Alkmaar and Den Helder in the province of North Holland. The tulips fields are spread over an area of more than 1,300 hectares.

Drechterland is a Dutch municipality, which is also located in the province of North Holland. In this region, the tulips fields occupy approximately 858 hectares.

In this region, the tulips fields are also quite large, spreading over an area of 847 hectares. In addition, tulips are also grown indoors, by one of the largest growers in the Netherlands. Tourists can see the tulips fields from the towns of Medemblik, Hoorn and Enkhuizen from a historic steam train that goes on a special route.

Fun facts about the flower industry in the Netherlands: