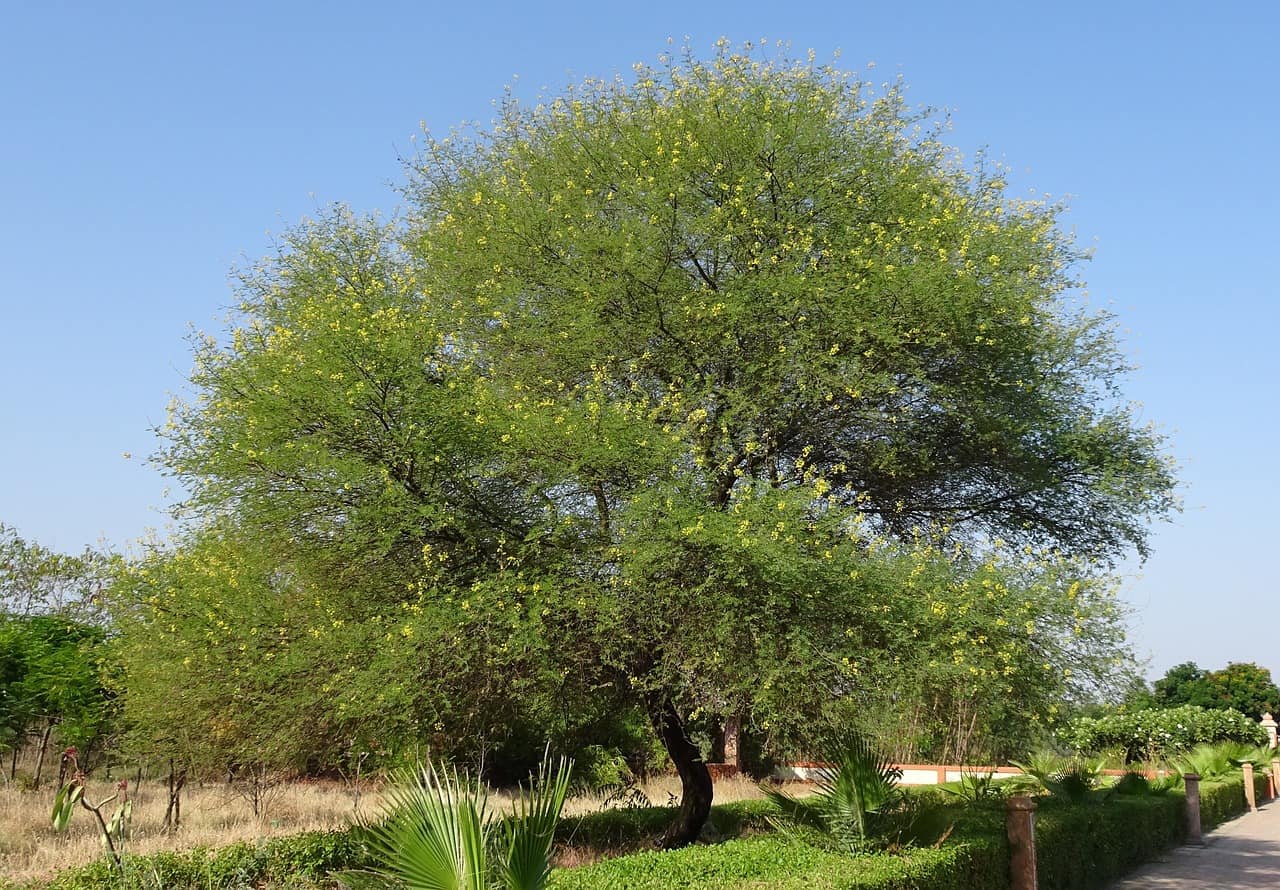 If you ever paid attention to the ingredients list on food products, you most likely noticed that gum Arabic is a very common ingredient. But what is this gum and where does it come from? Well, gum Arabic is a “hot commodity” for African farmers because it has various uses, not just in the food industry.

What is gum Arabic?

Gum Arabic is a natural plant-derived gum produced from the dried sap of several species of Acacia trees, which is why it’s also called acacia gum. The gum is produced mainly from Acacia species such as Acacia nilotica, Senegalia (Acacia) senegal and Vachellia (Acacia) seyal. The main component of gum Arabic is arabinogalactan, a bipolymer of galactose monosaccharides and arabinose.

Acacia trees are grown in the Sahel eco-region, a transition region between the southern belt of the savanna and the northern Sahara Desert. This area includes Senegal, Somalia, Eritrea, Chad, Burkina Faso, Mali, Cameroon, Mauritania, Niger, Nigeria, and Kenya. However, the majority of the production of Acacia, almost 80% of it, comes from Sudan. So, Sudan is the largest gum Arabica producer in the world.

How to cultivate gum Arabic

Acacia trees are very resistant in drought climates and they grow well even in arid and semi-arid lands in African countries. They were also introduced in areas such as Australia, Egypt, Puerto Rico, South Asia, India, Pakistan, and the Virgin Islands. The trees grow in certain climatic conditions, such as annual rainfall between 380 mm and 2280 mm, and annual temperatures between 16.2 Celsius degrees and 27.8 Celsius degrees. Acacia trees may be tolerant to drought (even in regions where the drought seasons lasts up to 11 months per year), but they can’t tolerate frost.

The trees are mainly propagated by seeds, which are harvested before the pods are dry, to prevent insect attacks. The seeds are usually treated with insecticides and stored in areas where the temperature is maintained at around 10 Celsius degrees. This way, the seeds can be viable for up to 10 years.

Before the seeds are planted, they are soaked or nicked, or they are put into a sulfuric acid solution for 3-15 minutes and they dropped in boiling water for a few seconds. This process is used to break the seed dormancy.

Vegetative reproduction is also possible, through shoot cuttings. The seedlings need to be watered every 7th day. Although Acacia trees can be grown in nurseries or directly in the field, the trees have a slow-growing rate. The field must be prepared before the trees are planted, meaning that it needs a lot of water.  Planting should be made with a minimum spacing of 4 m x 4 m in pure stands or 10 m x 10 m in intercropping systems. Acacia trees can be planted with other crops such as beans, millet or groundnuts. Young plants can attract certain animals, so it’s necessary to take preventive measures. The trees can be tapped after 4 years, so it takes some time to receive the profits from such a plantation however, they remain productive for up to 20 years.

In addition to their production value, Acacia trees can help prevent desertification of certain areas because they serve to stabilize dunes and to act as a windbreak – especially in the case of larger plantations. The trees are also valuable for agroforestry systems because they can be combined with sesame, sorghum, millet or groundnut. Certain studies also show that they can improve soil fertility.

How is gum Arabic processed

After harvesting, the gum Arabic is brought into cleaning sheds, used to remove impurities, sand and any pieces of bark that are left in the substance. The sorting and cleaning of gum are made tears, that are between 2.5 cm and 5 cm and size and then they are packed in jute bags. The gum is further processed in the countries where it’s exported.

These processes can vary, depending on the purpose of the gum Arabic. For example, the kibbling method is used, where uniform pieces are made in the size of pebbles. The gum can also be granulated, powdered or spray dried. Kibbling involves passing large clumps of gum through a hammer mill and then screening it to produce smaller granules. These smaller pieces are easily dissolved in water and can be handled better instead of the raw gum. Powdered gum is produced from the kibbled gum or through the process of spray drying. The powder has even better solubility characteristics and is considered of higher quality.

Gum Arabic is stored and transported usually in burlap or jute sacks of varying quantities and depending on the regulations enforced by each country. For example, the regulations in the USA require that only new and unused jute sacks are used to transport and store gum Arabic. In terms of quality control, several conditions apply:

A brief history of gum Arabic

Now that we covered the main aspects of gum Arabic cultivation and processing, let’s find out a few interesting facts about the history of this plant-based gum.

This is one of the oldest natural gums known in history. It has already been used in the Stone Age, as a food, in the Sahara Desert and as an adhesive in Africa. This means that people already knew about the properties of the gum Arabic at least 70,000 years ago.

Around 4000 BC, the Chinese and the Japanese used this gum for painting. Other documented usages of gum Arabic have shown that in Egypt, around 2650 BC, it was used to prepare ink, dyes, and watercolors. The gum was used as a pigment binder for paints and hieroglyphs. It was also used to make the mummy bandages stick fast, in cosmetics and food. It is said that Cleopatra’s favorite lipstick was made with gum Arabic. In other words, the gum had similar uses to the ones in our time.

The Ancient Greeks were also familiar with gum Arabic. Theophrastus and Pliny mentioned it in their writings for its therapeutic uses. It was used to relieve irritations, skin burns or ulcers, to stop nose bleeds or to make poultices.

When the gum became more and more spread throughout Europe, its usages also became more and more varied, especially for therapeutic purposes. During the Middle Ages, gum Arabic was highly appreciated by illustrators and scribes because it was a popular binder for pigments. Even famous painters like Rembrandt used it in their inks to create beautiful paintings and drawings.

The modern industrial era brought some important changes to the uses of gum Arabic. It became an ingredient in gum bichromate prints in early photography, in lithography and the textile industry. Stamps, glue and carbonless paper all have gum Arabic in common, but the food, cosmetic and pharmaceutical industry are the main fields of application nowadays.

Uses in the main industries

The main uses of gum Arabic are in various fields of the food industry. Gum Arabic is widely used in sucrose products, especially in those with high sucrose content, having the role of blocking its crystallization, but also for its emulsification capacity, and in the case of some products having the role of thickening agent (for example in sugar-coated candies and chewing gum).

For dairy products, gum Arabic is used as a stabilizer in frozen products, due to its water retention properties, giving the products a finer texture and making them melt slower.  In some baby products, it is used as a protective colloid.

Gum Arabic is used for the property of stabilizing the emulsions in the composition of glazes for flour products, having the role of conferring a good adhesion to them.

The ability to act as an emulsifier has determined its use for stabilizing concentrated flavor emulsions, which are used in the soft drinks industry, or for producing encapsulated, dried flavors, which are used in powdered soup products and premixes for cakes and other baked goods. In the case of encapsulated flavors, the gum forms a protective film around the flavoring particle, preventing the oxidation and volatilization of the flavor compounds, and its high solubility causes the buffer to easily release upon entering the water.

In the food industry or pharmacy as a substance, the gum is used to increase food viscosity, as an emulsifier and as a stabilizer.

In the production of paints, watercolors, it is used as a binder, in lithography, or in mixture with chalk it is used for polishing metallic surfaces.

As a natural ingredient, gum Arabic had its fair share of controversies. Listed as E 414 in the European ingredients list, gum Arabic is one of the few additives use for food processing that is considered on the safe side. However, this ingredient became rather infamous due to political reasons. Gum Arabic is calorie-free, pesticide and allergen-free, so it should be one the most sought out ingredients. Unfortunately, because of the political situation in Sudan, gum Arabic was not exactly popular in the last decades. The exports of this product became an important issue for the economic relationships between Sudan and the USA and there are still some uncertainties regarding this matter.

On the bright side, a report released by the Consultative Group on International Agriculture Research showed the importance of gum Arabic in the context of preventing widespread starvation and reducing crop destruction. The role of gum Arabic regarding these issues is expected to increase by 2050.

The price evolution of gum Arabic

Especially the European market for gum Arabic is continuing to grow, although at a slow pace. Food and drink manufacturers appreciate the properties of this gum and are willing to buy large quantities from suppliers that can guarantee a stable supply. IMR International estimated the global market for gum Arabic used for food at 54,000 tons worth around 171 million euros in 2017. The biggest markets for gum Arabic imports are France, Germany, the UK, and Italy.

Considering the market evolution for gum Arabic, farmers who intend to invest in these types of plantations should consider some important tips that may help them achieve a good position on the market:

Although gum Arabic had its ups and downs over the last decades it is still a product that has a steady demand on the market, regardless of the changes faced by the industries in which it’s used. In other words, it’s highly unlikely that it will be replaced anytime soon by something else, so there will always be room for growth and higher market value.